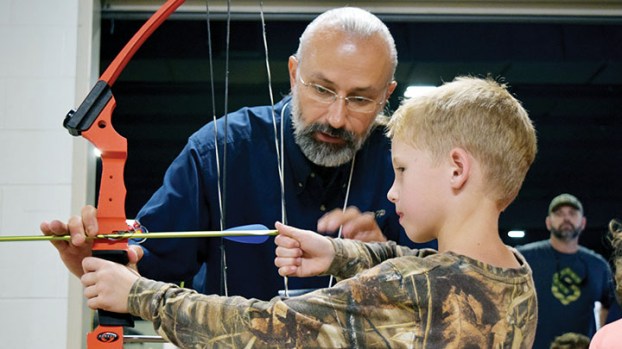 In celebration of three decades of the Mississippi Loggers Association, Lincoln Civic Center director Quinn Jordan will dance on a floating log while throwing axes like a trained lumberjack.

OK, so that’s not going to happen.

But Jordan will be present at the annual Lincoln County Wildlife and Outdoor Expo Friday night and Saturday and so will some amazing daredevil lumberjacks who will actually show off their skills in several competitive events like log-rolling and crosscut sawing.

The annual expo is joining forces with the MLA for its 30th anniversary to host the event, with a share of the proceeds going to the Log-a-Load for Kids.

Since 1994, MLA has contributed more than $852,000 to Blair E. Batson Hospital for Children at the University of Mississippi Medical Center in Jackson.

With that partnership, those attending the expo this weekend can watch professional lumberjack shows, Jordan said.

MLA will also showcase various logging equipment, which will be on display near the arena.

The event is family-friendly with several activities specifically for children. The catfish hand- grab tank is back and is a popular attraction. The instructions are easy to remember — climb into the tank fully clothed and grab a catfish. Easy enough.

“The get out and dry off a little bit and in about 10 minutes they’re dry and walking around,” he said.

The pig chase is also popular. Children 12 and under chase a few 20-pound to 30-pound porkers aroud the arena aiming to grab one of the colored ribbons from a pig’s foot. They match the ribbon to the corresponding prize envelope and win what’s in it, he said.

There will also be baby alligators, face painting and demonstrations from “The Snake Man” Terry Vandeventer. An Aim Program Bow Shoot and M4 Open Bow shoot will be held at the stall barn.

In case of rain, organizers have you covered, literally. Jordan said much of the expo is either in the stall barn, the arena or in the civic center building so attendees can stay dry.

The expo is at the Lincoln Civic Center Friday from 5-9 p.m. and Saturday from 9 a.m. to 6 p.m. Tickets are $6 for adults, $5 for children 12 to 7 and free for children 6 and under. Adults tickets serve as a raffle entry to win a shotgun, Jordan said.

Several food vendors will be on site — Jordan is already thinking about trying the jambalaya, Broma’s burgers and pulled pork sandwiches as well as the hot fried pork skins, kettle corn and frozen lemonade.

Aside from food, activities and entertainment, the expo will feature booths dedicated to the great outdoors and the merchandise aimed at the great outdoorsmen and women and their families — hunting knives, game cameras, game calls, stands, tractors, side-by-sides and ATVs, campers, boats and just about any other item a hunter or angler might need.

The expo is a favorite for those who attend as well as those who participate, Jordan said.

“This show is usually voted by the participants as the No. 1 family show they attend each year. They love it,” he said.

The banquet is a fundraising event, with proceeds going toward the conservation of the state’s whitetail deer population. Tickets are $50 for individuals and $75 for couples and are available at the door. For info, call Bruce Gray at 601-754-5592.

Those who voted Republican in the Aug. 6 primary election as well as those who didn’t vote at all are... read more