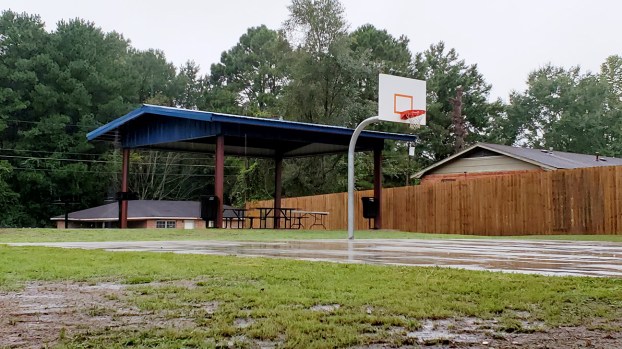 The public park at Brignall

Nearly a year after an overgrown, littered lot in Brignall was transformed into viable green space for children to play and families to gather for parties and barbecues, a resident in the area wants to know when bathrooms will be added.

Halbert Irvin is disappointed that restroom construction was eliminated from the first phase of the project at the corner of Broad and Ellis roads. Phase 1 was completed last fall.

Irving complained that Brignall is 2.5 miles across and children must go home to use the restroom.

“You wouldn’t build a house without the basic necessities,” he said, addressing the board Tuesday. Irvin was placed on the agenda the week prior and given five minutes to present his concerns. “I’ve got a son up there that’s playing basketball. There’s no place to use the restroom. He’s got to go a mile and a half to the restroom. He’s going to find a tree someplace, and then police are going to be called for indecent exposure.”

The board on Aug. 23, 2018, accepted the lowest of three bids for Phase 1 of the park project. Southern State Construction of Brandon was awarded the contract based on their bid of $96,500. That’s $21,500 more than the board expected when they finalized plans for the park. Phase 1 originally included ground work to clear the lot, construction of a basketball court, a fence and a pavilion built on the slab that was already there as well as bathrooms. Plans for Phase 2 included lights.

Habitat for Humanity of Lincoln County donated the double lot to the city. The non-profit charity purchased the lot from the city years earlier for the cost of back taxes, but donated it back to the city in November to create a suitable green space for families to picnic and kids to play.

The lot had been vacant for about 20 years and was overgrown and littered with cans and broken glass. The city cleaned it up and contractors took down trees.

The Brookhaven Recreation Department donated barbecue grills for the park.

Mayor Joe Cox told Irvin the three bids ranged from $96,500 to $176,000 and the city went with the lowest bid. The board then voted unanimously to eliminate the restrooms from Phase 1 as a cost factor.

“At the time, we didn’t realize the bids would come in so high,” Ward 1 Alderman Dorsey Cameron said Tuesday.

Cameron was elected in 2017 after a four-year absence from the board.

“I really wanted this park for Brignall,” he said. “If we’d had to buy land we wouldn’t have nearly what we have there. That was a sore eye in Brignall. You know it. I know it and everybody who lives around there knows it.  What we’ve done there now has been a big improvement to Brignall. And that was the idea.”

He said the basketball goal was a solution to get children out of the streets playing basketball with portable goals.

“I wish it could have been bigger, some small-kid play equipment in there. And there still might be one day. But it’s all not going to done in one phase,” he said.

He said the city’s three parks were all built in phases.

“Bi-centennial (Park) went years without a restroom,” he said.

Cameron doesn’t want the community to wait years, but with aldermen cutting costs across the board, he doesn’t expect it in the next year. He believes they’ll add restrooms eventually.

“I’m not saying there won’t be one. But I know it’s not going to be today and it won’t be tomorrow,” he said.

Cox suggested Irvin talk more with Cameron about the project and the alderman can propose taking bids on Phase 2 in the next budget year, 2020-2021.

Brookhaven’s sales tax receipts are down from the previous month, but signal a good start to the fiscal year. July’s... read more