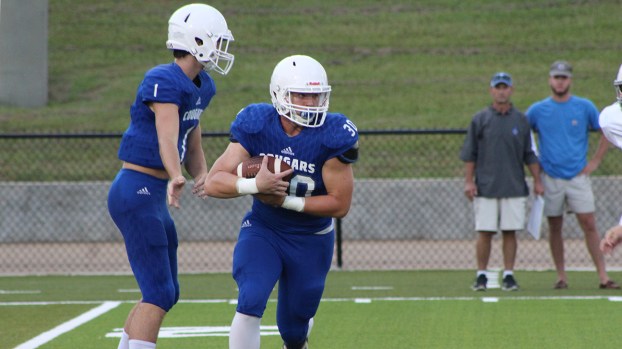 Photo by Cliff Furr Nick Ogden takes a handoff in a game earlier this season.

Cougars refuse to fold, storm back to beat Sylva-Bay

“I don’t think I’ve ever been part of a bigger comeback,” said Brookhaven Academy head coach Ron Rushing late Thursday night as he rubbed his sweaty head. “I can’t remember ever being part of a comeback like we had tonight.”

As halftime began two hours earlier, those final results seemed improbable if not impossible. Sylva-Bay had run the opening kickoff back 84-yards to jump out 6-0 just 15 seconds into the meeting of the two teams at the 4th Annual KDMC Kickoff Classic hosted by Copiah-Lincoln Community College.

The excitement of playing on the new turf at Stone Stadium had been quickly tempered by 24 minutes of football that was dominated by the Saints.

BA looked dazed and confused after the kickoff return. Sylva-Bay used 45-yard run by Ty Crosby to set up their second score of the night as quarterback River Thomas ran in from 5-yards out to put the Saints up 12-0 with 6:05 remaining in the first quarter.

The Cougar game plan early was to run the ball, but Sylva-Bay neutralized any sweeps to the outside and as BA attempted to gain a spark by going to the air, the Saints feasted on turnovers. In all the Cougars turned the ball over five times in the first two quarters.

Down 18-0, BA got on the board with a 34-yard touchdown pass from sophomore quarterback Tyler Fortenberry to junior wideout Dillon Fortenberry. Dillon is the cousin of Tyler and junior Trey and joined the team this Summer to play with his family.

BA had cut the lead to 18-6 with over a quarter left in the half, but the momentum didn’t stick as Sylva-Bay kept the pressure on. Tyler Fortenberry threw one interception in the Sylva-Bay end zone and another interceptions was taken back for a 55-yard scoring return by Jayden Henderson of Sylva-Bay.

It looked like the Cougars had gotten a pick-six by Trenton Tarver to end the half, but a holding penalty called it back and BA had to settle for a Cory Case field goal that cut the score to 31-9 at the break.

BA wideout and defensive back Harrison Brownlee is one of three seniors on the team. When SBA was up 18-0 you could hear him imploring his young teammates to keep fighting and to not give up. The Cougars were doing too much infighting and not enough fighting back according to their senior leader.

“We had too much arguing and finger pointing,” said Brownlee. “The dressing room at halftime was really quiet at first and then coach started getting after us. I knew we’d respond.”

On the first drive of the second half BA got back to running the ball. They marched down the field in the first 90 seconds of the third quarter as Nick Ogden ran in from 15-yards out to cut the lead to 31-16.

“I challenged them to come out in the third quarter and cut it to 15 points early,” said Rushing. “They responded and then the defense really started to run to the ball and get into their backfield.”

Tyler Fortenberry and Ogden began to click in their run-pass options and the sophomore quarterback started to pick up big chunks of yards on the ground as the third quarter rolled on. The teams dressed similar sized rosters, but in the second half the Saints looked fatigued as cramps took out a player on nearly every drive. The offensive and defensive lines of BA began to control the point of attack on both sides of the ball.

Fortenberry put the game away in the fourth quarter. He hit Brownlee on a 36-yard TD pass that cut through the middle of the Saint defense to give BA their first lead on the opening play of the fourth quarter. On the next Sylva-Bay drive he intercepted a pass and returned it 50-yards for a touchdown to give the Cougars their final score of the night.

Fortenberry finished 18-of-29 passing for 229 yards, five interceptions, and two touchdowns. On the ground he rushed 18 times for 90 yards and one score. Ogden ran 14 times for 54 yards and a pair of scores.

As a linebacker Ogden made eight tackles including two for a loss. Trey Fortenberry had nine tackles, two for a loss, and caused a fumble. Tarver and Brownlee had six and half tackles each.

“Tyler settled in in the second half,” said Ogden “It was his first high school start and he does a great job with the reads when we go run-pass option.”

The Cougars are on the road next week in Liberty as they take on Amite School Center. The second game of the season won’t likely match the roller coaster ride that was the season opener.

“We talked about adversity at halftime and usually at some point in every season you have a moment where your team is defined by how they respond,” said Rushing. “Very rarely does that happen in the first half of the first game.”

Bogue Chitto and Enterprise will kick their seasons off tonight at home as the 2019 high school football season gets... read more