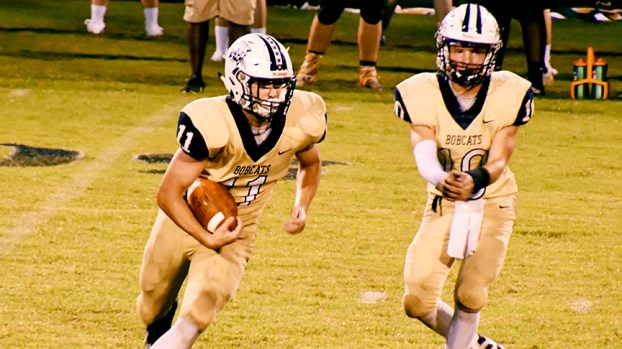 Price boots BC past McLaurin at buzzer

Sophomore kicker Carson Price drilled a 31-yard field goal as the final horn sounded Friday night to lift Bogue Chitto past McLaurin 23-20 in the season opener for both teams.

A large crowd of Bobcat fans at Troy Smith saw a close game come down to a final drive as BC and McLaurin appeared to be headed to overtime at one point.

Facing a 4th-and-23 with 44 seconds remaining in the game, senior quarterback Shaw King hit junior running back Owen Anderson with a pass that Anderson ran all the way down to the 14-yard line. Head coach Gareth Sartin called a timeout to set up the winning kick by Price.

Long snapper Eli Cupit perfectly hiked tje ball to holder Felder Sartin, who put the ball down as Price drilled it through the middle of the uprights.

The Bobcats had fumbled on their first possession of the game to set up a McLaurin score. The visiting Tigers led 20-14 at halftime.

“We hurt ourselves early with some turnover and penalties,” said Sartin. “We got drawn offsides once to extend a drive for them that they scored on. I’m really proud of how the defense settled in and shut them out in the second half.

On a muggy night when cramps were an issue for both teams, Sartin saw his team run to the football in the second half as they stymied the McLaurin ground game.

“We did a great job of gang-tackling in the second half,” said Sartin. “It’s just an awesome way to start the season. The kids never hung their heads even when we were down. I’m really proud of the boys and their effort, it was a total team win.”

The Bobcats are on the road next week as they travel to Sand Hill to play the Pisgah Dragons. McLaurin will host Loyd Star next Friday.

The Wesson Cobras fought until the final whistle Friday night, but couldn’t get control of Crystal Springs as the Tigers... read more