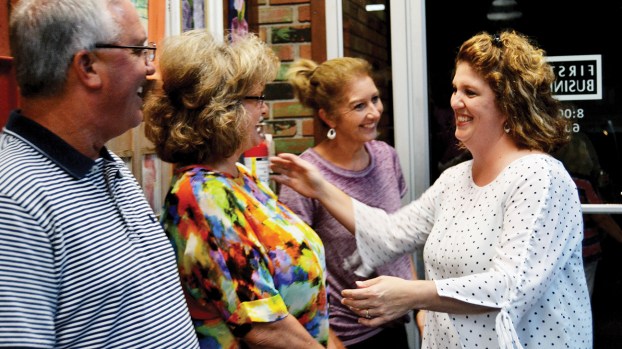 Lincoln County elected its first female chancery clerk Tuesday night when Alisha McGehee walked away with 56.52 percent of the vote.

McGehee will replace Chancery Clerk Tillmon Bishop when he retires in December. She has worked in the chancery clerk’s office for 22 years, hired by Bishop’s predecessor, J. Ronny Smith.

Smith died Aug. 13 before he got to see McGehee win the race.

“Mr. Ronny would call me every week or whenever he could,” she said from her victory party. “He was a really great mentor. From Mr. Ronny and Tillmon, I have two people’s very big shoes that I have to fill.”

The race stayed close as precinct after precinct rolled in to the Lincoln County-Brookhaven Government Complex. Dozens of people filled the hallway outside the circuit courtroom, watching the numbers change on a large screen on the wall.

Moak watched the results just outside the courtroom with his wife Dienna, while McGehee stayed across the street with her family at the First Street Business Center. As her numbers began to edge out Moak’s, supporters congratulated her, but she didn’t want to acknowledge the win too soon.

McGehee said she always felt God was in control during the campaign and believes Lincoln County would have benefited from either candidate.

Moak thanked his supporters for their hard work.

“We ran our campaign with integrity and character and I am grateful for all who helped,” he said. “We also did the best we could with the time we were allotted due to work and family responsibilities. Alisha and her family ran a great campaign and she is very deserving. I know she will work hard and will represent Lincoln County well.”

While voters across Lincoln County were tasked with choosing the winner of the chancery clerk Republican runoff, only some of... read more