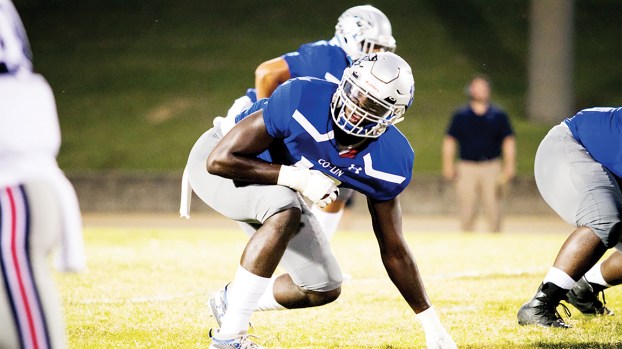 Photo by Co-Lin Sports Information Co-Lin defensive end Jordan Davis is one of four Wolves that are committed to Mississippi State. Davis is rated by some scouting services as the number one JUCO recruit in the nation. The Wolves begin their season tonight by hosting Holmes Community College for a 6:30 p.m. kickoff in Stone Stadium.

The 2019 campaign kicks off for coach Glenn Davis and his Copiah-Lincoln Community College Wolves with a 6:30 p.m. matchup Thursday night with the Holmes Bulldogs.

The game will be the first for Co-Lin on the new playing surface at H.L. “Hook” Stone Stadium. The new turf is part of the “Back the Pack” capital campaign to improve athletic facilities at the college.

The Wolves are facing a Holmes team that runs a unique offensive front with triple-option look. The Bulldogs will operate under center — unlike every other MACJC team besides Southwest, who also runs the triple-option.

It’s never easy to start with a team that runs a specialized offense as extra time must be spent on stressing fundamentals to contain the pitch-game used by Holmes.  Last season Holmes beat the Wolves 29-28 with a field goal that came with 34 seconds remaining in the game. That night Holmes rushed for 257 yards while throwing for 187. The Bulldogs set up the play action with their inside runs, something that the Co-Lin linebackers and safeties will have to help slow down.

Two of those Wolves are on the offensive side in lineman Sebastien Dolcine and receiver Malik Heath. Dolcine is a Kentucky transfer from Florida while Heath signed with MSU out of Callaway High in Jackson.

Heath has had much of the SEC chasing his commitment with South Carolina making an especially strong push to land him. In late July Heath committed to State while also saying his recruitment was still wide open. He clarified his remarks later and appears to be a solid commit for coach Joe Moorhead.

Defensively Co-Lin has a pair of State commits in end Jordan Davis and linebacker Tyrus Wheat. Davis is ranked by some publications as the top JUCO talent in the nation. He is a Memphis native who signed with the University of Alabama out of high school.

Wheat is from Amite City, Louisiana, and moves to linebacker this season from safety. He’s the most recent Wolf to commit to MSU and will be one of the leading tacklers for C-L in 2019. Wheat was a verbal pledge to the University of Missouri while in high school and expect the Tigers to still hunt him in recruiting.

Kentucky transfer Danny Clark takes over at quarterback and is a new player that Co-Lin fans are eager to see. The Wolves have a talented group of receivers for Clark to deliver the ball to including Heath, Memphis commit Kundarrius Taylor, sophomore Antoine Robinson, Wesson alum Dell Thigpen, and tight end Trent Tyre.

Former Brookhaven High defensive back Jemaurian Jones will be one of the leading cornerbacks for the Wolves after transferring to Co-Lin from Southern Miss. Defensive back is a position group that the Wolves return plenty of talent in. A pair of Starkville High alums, sophomores Natrone Brooks and Jalen Ware, are leaders in the CL defensive backfield.

The game is “True Blue Thursday” when Co-Lin fans are encouraged to wear blue to the stadium. The 2108 state champ women’s tennis team will also receive their rings Thursday night.

The Daily Leader’s Defensive POW Harris saw the ball, took it to the house

Brodie Harris loves playing linebacker. Last season the Enterprise senior was a cornerback, but this year he was moved to... read more