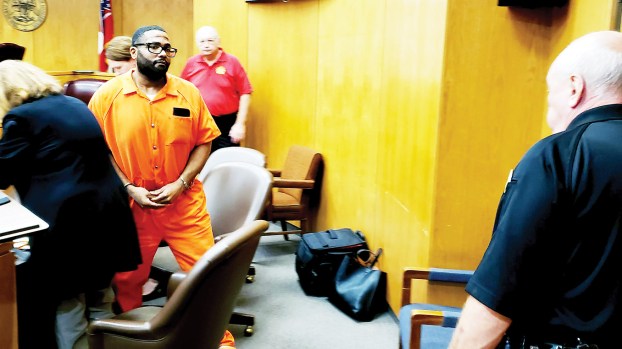 The state’s public defender office found another member for the legal team working for Willie Cory Godbolt after a Lincoln County lawyer removed himself from the case.

Lincoln County Circuit Judge David Strong said Thursday that Hazlehurst M.A. Bass will be joining the defense because attorney Jason Tate filed a motion with the court to withdraw as counsel for the defendant because he ended his employment with the Lincoln County public defender’s office.

He is charged with four counts of capital murder, four counts of first-degree murder, attempted murder, two counts of kidnapping and armed robbery related to the shooting deaths of deputy William Durr, 36; Barbara Mitchell, 55, her daughter, Tocarra May, 35, and Mitchell’s sister Brenda May, 53, all of Bogue Chitto; Austin Edwards, 11, and his cousin, Jordan Blackwell, 18, of Brookhaven; and Ferral Burage, 45, and Sheila Burage, 46, of Brookhaven.

He is being held without bond in the Copiah County Jail.

Steiner said Godbolt’s rights will be violated if he does not receive adequate representation in his death penalty case. Bass will replace Tate as third-chair attorney on the defense team. A second-chair attorney will be named at a later date.

Strong said Thursday that any attorney Steiner chooses for the defense team should be ready to participate in a trial that is set to begin Feb. 10 in either Lincoln County or Pike County. The judge has said previously that the trial may be moved to Pike County’s courthouse because it has a larger courtroom and he anticipates more interest in this case than others that have been heard in Lincoln County.

No matter which location Strong chooses, the jury will come from DeSoto County.

“We have a hard trial date,” Strong said. “We’ve taken steps to have DeSoto County set aside time for us to pick that jury, vacate the courthouse. You impose a lot on a county that you go to to get the jury and we’re going as far as we can to get a fair and impartial jury in this case.

“While we’re going to do everything we can to accommodate the defense counsel and the state, we also need to keep in mind the good people of Desoto County who are making sacrifices to help us go forward with this matter.”

The court also ruled in favor of Steiner’s request to seal search warrant requests to keep potential jurors from seeing the information.

Strong said he does not expect DeSoto Countians to see the docket information, which is only available to the public through a subscription service categorized by county circuit clerks’ offices.

Steiner argued that when the Associated Press picks up local stories to distribute to newspapers nationally, it’s possible for a story written in Lincoln County to be read by residents of DeSoto County. Steiner is concerned DeSoto County jurors could read about the case if it is published by The (Memphis) Commercial Appeal.

The next hearing is set for Oct. 2 in Lincoln County Circuit Court to discuss jury questionnaires and any other motions that may be filed in the meantime.

The Mississippi Bureau of Investigation is currently working a cold case involving a missing person and is asking for assistance.... read more