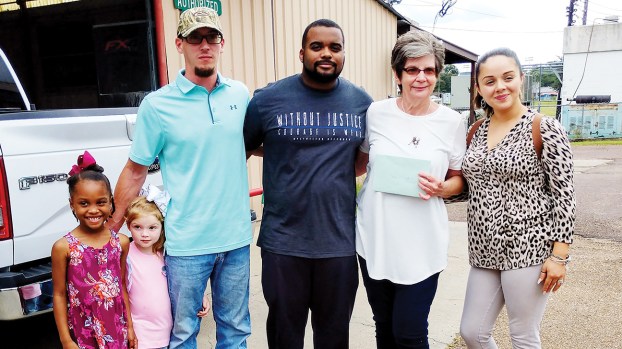 Vicki Moak’s Warriors of the Badge program is doing what she planned: Helping survivors of first responders killed in the line of duty and those critically wounded on the job.

In May, Warriors of the Badge presented its first check to the widow of Biloxi Police officer Robert McKeithen. The 24-year officer was gunned down just steps from the front door of the Biloxi Police Department earlier that month.

The group gave a check Saturday to Concordia Parish Sheriff’s deputy Walter J. “Mack” Mackel. He was shot July 25 while investigating an armed robbery in Vidalia, Louisiana. and is recuperating from several surgeries. He, his wife, Pamala, and daughter Madison were at the presentation.

“It was very emotional to meet deputy Mackel,” Moak said. “He’s got a long road ahead, but I’m so glad he made it.”

“What an amazing woman Mrs. Moak is,” she wrote. “Today, she inspired me to push forward, to see the good in what’s left, that anyone can choose to be a warrior and in my eyes what Mrs. Moak is doing after everything she’s been through proves that she too is a warrior and light to so many.”

Moak said it’s a blessing to be a blessing, and everyone who has made donations, bought T-shirts or played in a softball tournament are part of the blessings.

“Law enforcement officers and other first responders don’t make a lot of money,” Moak said. “They work a second job or the wife works. So when one of them is killed or critically wounded, the family has suddenly lost a paycheck.”

“I want to give them or their families some kind of security and to let them know that the people of Lincoln County care.”

Moak said she initially wanted to help first responders after Lincoln County deputy William Durr was killed May 27, 2017. Durr was shot while responding to a domestic call in Bogue Chitto. The suspect, Willie Cory Godbolt, also allegedly killed seven family members, some of them minors, in Bogue Chitto and Brookhaven.

Durr was a Brookhaven police officer four years before he became a deputy.

“Zack came in and said he’d lost a deputy (Durr) and he’d been out all night trying to find Godbolt,” his mother said.

Godbolt was later found. It was also was around the time that officers in South Carolina were killed.

“I kept thinking, ‘What can I do to help?’ Of course, you can pray, but what can you do?” Moak asked.

She began to pray about it.

“After Zack passed away, it came to me,” Moak said. “I told the pastor after the funeral that I felt like Zack would be saying ‘take care of my people.’”

Moak spoke with an attorney and began the tedious process of forming a nonprofit group.

“I didn’t think I could do it,” she said. “But I’ve come this far with God’s help every step of the way and help from others.”

The group held a prayer rally in March and fundraisers began. Supporters began donating to the group’s account at Bank of Brookhaven.

Two fundraisers are set: A dunking booth at a Lincoln Civic Center event on Saturday and a Ride for the Fallen on Oct. 12. Individuals can participate on motorcycles — which Zack Moak loved — or in cars and trucks.

In time, the group’s Facebook page and website will have a “donate” button. Meanwhile, donations can be made at Bank of Brookhaven or at Warrior of the Badge events.

The state’s public defender office found another member for the legal team working for Willie Cory Godbolt after a Lincoln... read more