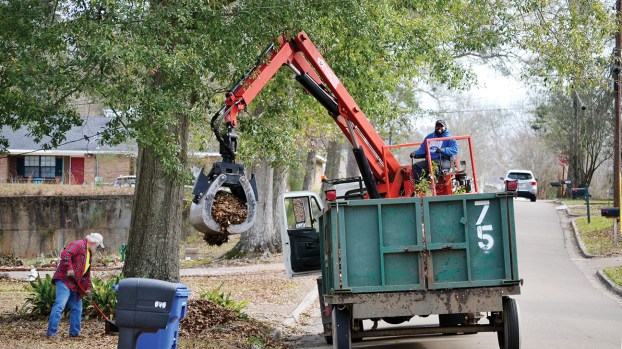 Photo by Donna Campbell Workers with the Brookhaven Solid Waste Department clean debris from a yard on Smylie Street earlier in the summer.

Brookhaven utilities may go up

Brookhaven residents can expect to see a $3 increase in monthly utility bills, but no additional taxes for the new fiscal year.

The Board of Aldermen is expected to adopt the budget Tuesday at a regularly scheduled meeting at 6:30 p.m. The new budget takes effect Oct. 1.

The board met Tuesday at the Lincoln County-Brookhaven Government Complex for a public hearing on the budget, which includes a proposed projected revenue of $12,997,000 with 34 percent — $4.4 million — financed through a total ad valorem tax levy.

The city’s millage rate of 33.86 will produce the same amount of revenue from ad valorem taxes as was collected the prior year. The millage rate was 38.40 in the 2018-19 fiscal year.

That means as a taxpayer, you will not pay more in ad valorem taxes on your home, automobile tag, utilities, business fixtures and equipment and rental real property unless the assessed value of your property has increased for fiscal year 2020.

City Clerk Samantha Melancon said the city budget will not require a tax hike, though the board will likely vote to go up $2 each month for solid waste, and 50 cents each on water and sewer.

Last year, aldermen followed the recommendation of the Mississippi State Department of Health and went up 50 cents for water and 50 cents for sewer for each customer. Mayor Joe Cox said last year the MSDH makes that recommendation to municipalities each year.

The budget, even approved, is just a roadmap that can be amended throughout the fiscal year, Melancon said.

The approved budget will be available in the City Clerk’s office for viewing by Wednesday.

“As a municipality, we are charged with the obligation to make a good faith estimate of the costs of providing garbage and rubbish collection and disposal annually and adjusting the fees accordingly,” she said.

Funds collected from the $2 addition for solid waste will be needed when the current landfill is closed and another landfill is opened, she said.

“The cost to close the current landfill, which has almost reached its current capacity, and open a new landfill, will be very costly. However, this is a requirement of Mississippi Department of Environmental Quality,” she said.

It’s not known when this fiscal year the landfill will be closed.

“The city has only increased the solid waste fees $5 over the past 11 years and this includes the $2 increase this year,” she said.

Melancon said the millage rates did not increase and the school millage rate decreased by 1.64 mills.

“This will help offset the increase,” she said.

Character asked the board to reconsider a funding request for bathrooms at Brignall Park.

“I wouldn’t think a park would be built and there wouldn’t be no bathrooms,” she said.

The plan had initially included restrooms in the first phase of construction, but when the bids came in at over $90,000, the board voted unanimously to build the park without the bathrooms. Bathrooms will hopefully be added in Phase 2, which includes lighting, Cox said.

“I agree that there should be some restrooms there and I believe we will get them,” Cameron said. “There’s not one there but I’m not saying there’s not going to be one there. You can’t do it all at once.”

Character suggested the board look at Hazlehurst’s park, which has portable bathrooms, and consider going that route. The board did not act on her suggestion.

Oliver, who works with the youth programs that use the sportsplex, asked the board to consider upgrading the parking area at A.L. Lott.

“We’re constantly trying to upgrade and improve that facility and that’s one item that we’d definitely like to see,” he said.

Ward 2 Alderman Shannon Moore would like to see a pavilion with tables and benches placed at the sportsplex beside the basketball court.

Fire officials have a saying for this extended holiday weekend: “Start the food, not a fire, this Labor Day.” It... read more