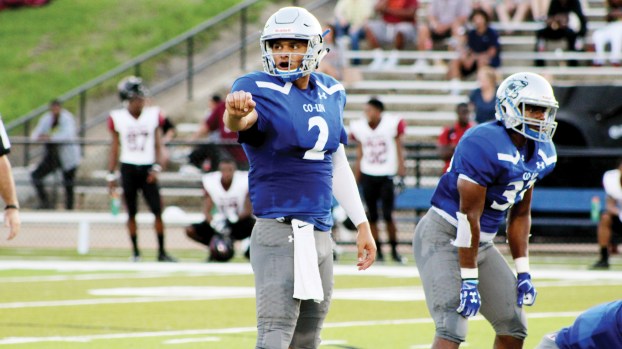 Photo by Cliff Furr Copiah-Lincoln quarterback Danny Clark checks with the sideline Thursday night against Holmes Community College. A transfer from the University of Kentucky, Clark went 15-of-27 for 198 yards and two touchdowns in a 26-20 Co-Lin win.

Playing the Holmes Community College Bulldogs and their triple-option offense is a lot like going to the dentist. Painful, but necessary.

On Thursday night in Wesson Holmes kept things close with the No. 17 Copiah-Lincoln Wolves for the entire game, but the home team was able to hold on for a 26-20 win in their season opener.

Holmes forced a Co-Lin punt on the opening drive of the game and then marched down the field with surgeon like precision to score the game’s opening touchdown. The TD came on a 1-yard run by fullback Terry Bryant with 7:02 remaining in the first quarter.

The drive was helped by a pair of 15-yard penalties on Co-Lin. One for interference on the punt and the other for a late hit out of bounds.

C-L responded with a crisp drive of their own that culminated with Kundarrius Taylor scoring on a 2-yard shovel pass from Danny Clark. Bryce Lofton nailed the PAT and the game was tied 7-7.

The Co-Lin offensive line began to assert themselves in the run blocking game and Co-Lin took the lead with a powerful 11-play, 86-yard drive. The capper was an 8-yard run by Drexlan Allen to make the score 14-7 with 4:51 remaining until halftime.

Allen ran for 1,277 yards and 18 touchdowns last season for a very good Hattiesburg High team. He was committed to Florida Atlantic for most of his senior season before coming to Co-Lin. On Thursday he was impressive with the ball in his hands as he rushed for 85 yards on 15 carries in his first college game.

Another freshman that the Co-Lin coaches expected to contribute early is wide receiver Erick Rogers from Shannon High School. After Holmes had tied the game at 14-14 in the third quarter it was Rogers who burned the Holmes defense for a 44-yard touchdown catch.

The Co-Lin passing game had many bright moments in Clark’s first start. The Kentucky transfer finished 15-of-27 for 198 yards, two touchdowns, and one interception. Star wide receiver Malik Heath did not dress out as he was serving his second game of a suspension that followed his ejection from the Southwest game last season.

The equally talented Taylor got dinged up Thursday night and was somewhat limited in his work late in the game. Co-Lin head coach Glenn Davis thinks his passing game can be even better moving forward.

“We had some drops tonight that were balls that we’ve got to grab,” said Davis. “Late I think the line was battling fatigue and gave up some penetration that they didn’t let through earlier. We’ll be better with Malik back and I think Danny is only going to get better.”

The left-handed Clark looks like a leader on the sideline and in the huddle. At 6-foot-3, 225-pounds — he has a pocket presence that allows him to see plays developing downfield. Clark was a two-time state champion in high school and rated as a four-star recruit by ESPN and Scout as a senior.

One thing that the Holmes running game does is keep the opposing offense off the field as they had the ball over seven minutes longer than Co-Lin in the game.

“You can lose anywhere to two to four possessions against them, depending on how successful they are running the ball,” said Davis.

For the game the Bulldogs rushed 54 times for 218 yards. Co-Lin defensive coordinator William Jones was doing his best to teach and correct the assignments for his unit after each Holmes possession. Davis says the scout team just can’t reproduce what the Bulldogs can do offensively.

“They ran a lot of the full-back dive tonight,” said Davis. “In our practices I bet we ran that play well only two or three times leading up to the game.  You just can’t reproduce that type of blocking with guys that don’t do it day in and out.”

Jones and the defense gave C-L a boost and some breathing room in the fourth quarter when lineman Khehlan Kennedy ripped the ball away from a Bulldog and returned it 65-yards for the score to put Co-Lin up 27-14 with 14:04 remaining in the game.

Coach Jeff Koonz and his Bulldogs didn’t give up though. They showed they can use the forward pass to move down the field and scored a touchdown with 96 seconds left to pull within six points.

However, the onside kick was corralled by Taylor and on a night when No. 1 East Mississippi lost at Hinds and No. 4 Jones College lost at Coahoma, the Wolves slapped away the bite of the upset bug.

Co-Lin is back at home in Stone Stadium next week when they host Northeast Mississippi for a 6:30 p.m. kickoff.