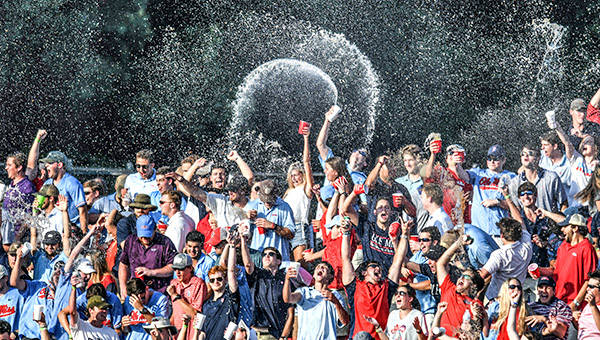 OXFORD — Ole Miss fans will no longer have to smuggle in their own drinks to use in a celebratory beer shower.

Ole Miss announced on Friday that it will begin selling beer at all of its major sports venues.

Alcohol sales will begin at Vaught-Hemingway Stadium beginning with the Oct. 19 home game against Texas A&M, and will continue through basketball and baseball seasons at The Pavilion and Swayze Field.

The university’s announcement comes in the wake of the Southeastern Conference’s decision earlier this summer allowing member institutions to decide whether to offer alcohol concessions during athletic events, a change in policy that has been in effect since the early 1970s.

Earlier this month, Southern Miss became the first Mississippi college to announce it would sell alcohol at games.

“The university has been deliberate in our approach to making this change,” Ole Miss Interim Chancellor Larry Sparks said in a release. “We have assessed the relevant issues and focused on an implementation timetable that works best for our university. Maintaining the safety of our patrons and participants and maintaining an atmosphere suitable for families is of utmost importance. We appreciate the support and patience of our fans as we implement this change.”

In a release, Ole Miss officials said the delay was necessary to implement various policies related to selling alcohol, promote responsible behavior, and assess and learn from other schools that are beginning sales this fall.

“Rather than implementing this quickly, we are focused on getting it right and on a timetable that is right for Ole Miss,” the school said in a release.

Ole Miss is the seventh SEC school to take advantage of the ban being lifted. Texas A&M, LSU, Tennessee, Missouri, Arkansas and Vanderbilt will also sell alcohol at football games in 2019.

“We expect in-stadium sales to reduce the temptation for binge drinking during pregame or sneaking in alcoholic beverages,” said Ray Hawkins, chief of the University Police Department. “This sales plan should lead to more responsible consumption and reduce negative behavior in the stands.”

Beer at Vaught-Hemingway will be sold at concession stands throughout the stadium, although some will be designated as alcohol-free. No alcohol will be sold in the student section.

Fans must be 21 years old and have a valid ID to purchase alcohol. There will also be a limit of two beers per transaction.

Sales will begin when the venue gates open, and end at the end of the third quarter during football games. Security will start closing lines with three minutes left in the third quarter so that only those still in line will be able to purchase beer.

Ole Miss also said in a release that stadium personnel and law enforcement will monitor fan behavior for public intoxication, underage drinking, throwing of objects and other unruly behavior. Those violating stadium rules and policies will be ejected without a refund.

HATTIESBURG — Southern Miss is set to become the first Mississippi university to sell alcohol in its football stadium during... read more