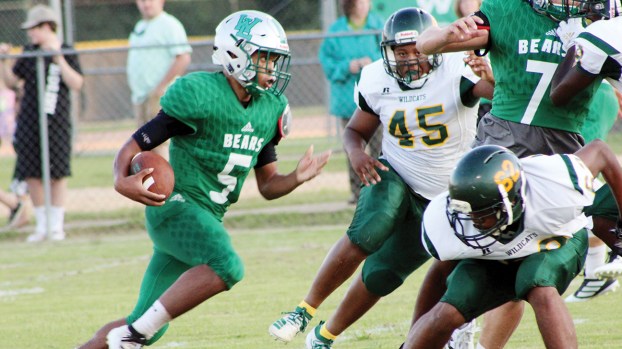 Photo by Cliff Furr West Lincoln sophomore running back Enrico Price darts into the end zone for a 1-yard touchdown run in the first quarter. Price finished with a pair of scores in a 33-18 West Lincoln win over Salem.

Bears get Bland his first win

The West Lincoln Bears are getting healthier by the day. Friday night they picked up a 33-18 win over the Salem Wildcats on Perry Miller Field as the victory was the first for rookie head coach Brad Bland.

Bland was able to play some key players that had to miss the loss last week at Mize in the season opener.

One of those players was senior halfback Michael Brothern. Leading 18-12 in the middle of the third quarter and needing a shot of adrenaline, Brothern broke off a 52-yard scoring run past the Salem defense and put the Wildcats in a hole too deep to dig out of.

The 1A Wildcats were a plucky group and ready for a fight early as WL led by one point — 13-12 — at halftime.

The opening kickoff of the game was a sky kick by Jacob Lofton of West Lincoln that was covered up by sophomore Gabe Bush to give the ball to the green and white. Bush rushed in and grabbed the ball as the Salem receiving team treated it like a live grenade and kept a healthy distance as the Bears rushed in.

West Lincoln then matriculated down the field and scored off the turnover when sophomore Enrico Price found pay dirt from the 1-yard line. Jacob Thornhill nailed the PAT kick to put the Bears up 7-0.

A WL fumble led to the first Salem score of the night when quarterback Rusty Hope hit Riley Rials for a 5-yard TD.

West Lincoln answered with a 59-yard scoring run by senior quarterback Travis Hall. Hall cut through the middle of the Salem defense and outran the Wildcat backers to find the end zone.

The green and white weren’t done with the long explosive plays as junior Chris Freeman scored on a 48-yard run in the fourth quarter. Freeman also picked off a pass as a defensive back.

Salem recovered a kick of their own to start the second half as senior J. B. Bridges booted a rolling ball and then ran beside and dropped onto it before the Bears could respond.

The Flea Hop defense held though and special teams gave the Bears another boost as Bush blocked and recovered a punt to give WL the ball deep in Salem territory.

The WL defense held again, and Freeman put the Bears right back into Salem territory with a long punt return. Price then got his second score of the night on a 5-yard scamper that put the Bears up 19-12.

WL quickly got the ball back on an interception by Kiaunte Lewis on the next Salem drive which preceded the big Brothern run.

Another Bear making his first appearance this season was junior linebacker Tate Smith. Smith was among a group of West Lincoln rushers, including Thomas White and Dylan Dickerson, that chased and harassed Hope in the second half.

Hope was a small, shifty QB with a strong arm who struck for a 70-yard passing score in the second half that went to Rials.

Bland was able to substitute liberally in the final 12 minutes as he gave Brothern, Price, Hall, and the offensive line duo of Grant Jackson and Jackson Taylor all ample time on the sideline.

His hope is that as the season progresses and the team gets healthier, the Bears will continue to improve each time out.

“I probably played Mike a little more in the second half than I had planned too,” said Bland. “But it was great to have him and Tate back out there. Grant played last week but was still working back from missing some time. I was proud of the way the defense played in the second half. We weren’t wrapping up and we had some really bad penalties that hurt us in the first half. The goal is to get healthy and cut out the false starts or the unsportsmanlike conduct penalties that we committed tonight.”

The Bears travel to Hattiesburg next week to take on the Sacred Heart Crusaders (0-1).

The Brookhaven High Panthers and Lawrence County Cougars traded scores early Friday in Monticello, but it was the Cougars who... read more