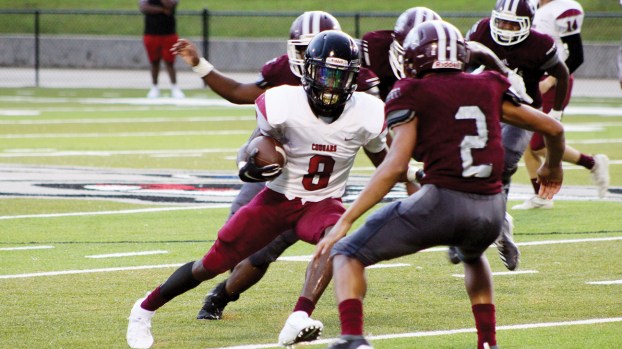 Photo by Cliff Furr Lawrence County running back Kylan Cooper scored on a 70-yard touchdown run in the second half as the Cougar rushing attack was more than Brookhaven High could handle in a 42-28 LC win.

The Brookhaven High Panthers and Lawrence County Cougars traded scores early Friday in Monticello, but it was the Cougars who kept landing the big shots late as they beat Ole Brook 42-28.

BHS got on the board first via a Byrion Robinson run, but LC answered back quickly on a kickoff return TD by Tae Cole that made the score 7-6.

It was Robinson who answered back again for BHS as his 24-yard run and a Trace Brady PAT kick put BHS up 14-6.

Again, it was another explosive play for LC that the Cougars answered with, this one a 70-yard touchdown run by senior Kylan Cooper that made the game 14-13.

The Panthers were primed to answer the bell again, but Robinson fumbled on the 1-yard line to give the ball back to the Cougars.

LC went up two scores when senior running back Antwan Pittman found a seam and raced to a 70-yard score to put the Cougars up 28-14 late in the second quarter.

In the second half the Cougars had an answer for every BHS score.

LC and their double wing rushing game was more than the Panthers could handle as the Cougars ran 33 times for 442 yards as a team.

“When you give up all the big plays we did on defense, it’s hard to overcome,” said BHS coach Tucker Peavey. “We’ve got to figure out what to do to improve in practice and then come out and execute in a game.:

Next week BHS travels to Petal to face the 6A Panthers (2-0). LC travels to Carriere to take on 5A Pearl River Central (0-2).

A 7-7 game in the first quarter turned into a rout as the Brookhaven Academy Cougars whipped Amite School Center... read more