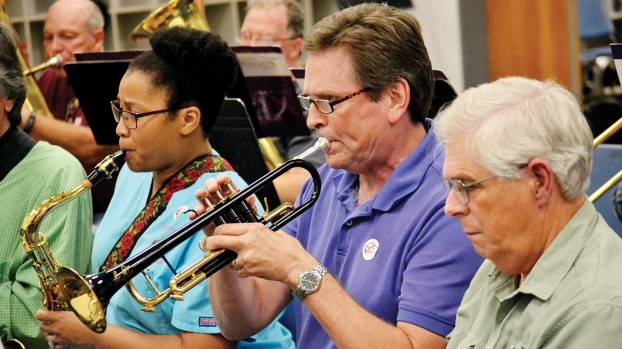 If you’ve ever played a wind or percussion instrument, now is the time to join the Ole Brook Wind Symphony for its fall season.

The symphony, whose performers range in age from 15 to 85, is recruiting, looking for wind players and percussionists. The current musicians, about 30 of them, come from across Southwest Mississippi.

“Even if you’re out of practice, like many of us were, you’ll find the symphony a welcoming and supportive group. We aren’t judgmental, unless you play a solo where there is none,” Edge said jokingly.

Auditions aren’t required, and rehearsals start Sept. 10 at 7 p.m. in the Alexander Jr. High band room. The school is at 713 Beauregard St., at the north end of Harris Street, but the band hall is accessible from Grenn Street.

The symphony is an enjoyable way for students to get more experience and for others to continue playing an instrument that they learned to play in school, Edge said.

He started playing baritone in the sixth grade while living in Dardanelle, Arkansas, but was asked to play the tuba in his small high school band because it was small and needed a tuba player.

Symphony co-director Leroy Smith, of McComb, says there are two quotes he likes that sum up the enjoyment, not only of performance, but also of being in the audience.

Smith said he enjoys the camaraderie of symphony members and seeing how they give it back in their instruments when they play.

“They’re almost like semi-pros and they play challenging music,” Smith said. “We’ve got a really good group of people with talent.”

He conducts most of the songs and plays alto sax and trombone as needed.

Smith learned to play at Ponchatoula High in Louisiana and at Southeastern University in Hammond.

He was a career high school band director who retired after six years as director at Parklane Academy in McComb. Smith has lived in McComb since 1962 and has been the director of music at St. Alphonsus Catholic Church in McComb for 36 years.

“Symphony members say how much fun it is to get away from the stress of their work, and how much they enjoy it,” Smith said.

The other co-director is Stanley Stewart, former band director at Copiah-Lincoln Community College. He was one of the original directors after the symphony was formed in 2001. Stewart sometimes fills in for the current director of the Co-Lin Blue Wave.

Edge said the fall season has a concert one or two weeks before Thanksgiving, probably Nov. 11 or Nov. 18, in Brookhaven and a Christmas concert in McComb on Dec. 12.

The symphony also presents two concerts in the spring.

Donations are accepted at the concerts. The money is used to buy sheet music, Edge said.

The symphony’s mission is to provide a place for those who enjoy playing music with a group, offer to the public good, cultural entertainment and in time include performances by guest vocalists, according to its website.

It’s definitely going to be a “Sweet 16” party for the guests at this year’s Brookhaven Animal Rescue League’s annual... read more