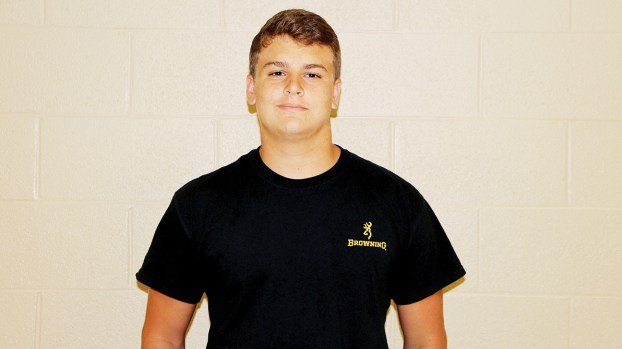 Photo submitted Gabe Bush, a sophomore linebacker for the West Lincoln Bears, is The Daily Leader’s Defensive Player of the Week.

The old proverbial “nose for the football” may be a cliché but Friday night it was the best way to sum up the play of West Lincoln sophomore linebacker Gabe Bush. Bush recovered a pair of fumbles, blocked a punt and made seven tackles in a 33-18 West Lincoln win over Salem. For his play Bush has been selected as The Daily Leader Defensive Player of the Week.

On the opening kickoff of the game West Lincoln kicker Jacob Lofton perfectly placed a sky-kick that caught the Wildcats off guard. The high kick went into the second line of the Salem return team and the Wildcat players paused, not sure who would catch the ball.

When the pigskin hit the ground and took a West Lincoln bounce backwards it was Bush who came flying in from the kickoff team to pounce on it. Bush dove headfirst onto the ball as a Salem player bent over to pick it up.

The West Lincoln sideline came alive with excitement as Bush and his teammates had perfectly executed the play to steal a possession at the start of the game. West Lincoln quickly moved down the field and Enrico Price scored a touchdown to give the Bears the early lead.

Bush and his West Lincoln defensive mates were busy in the first half trying to catch Rusty Hope, the scrambling quarterback leading the Salem offense.  The Bear defense buckled down in the second half as Salem only scored once in the final two quarters on a long pass from Hope to his tight end Riley Rials.

West Lincoln led 13-12 at halftime and early in the second half neither team could get much going on either side of the ball as WL was up 19-12.

That’s when Bush struck again. On a punt attempt he burst through the line to block the kick and then recover the ball. West Lincoln did not score on the following drive after they turned it over in the end zone, but they scored soon after as the blocked punt seemed to wake up the napping Bears.

The 5-foot-10, 180-pound Bush has played all over the field defensively for the Bears in the young season. He started off on the line but moved to linebacker against Salem.

“He’s the kind of guy who is willing to do whatever is best for the team,” said Bland. “He’s a great kid and a hard worker.”

Bush — son of Jason and Anita Bush — Bland and the Bears are back in action Friday when they play at Sacred Heart in Hattiesburg.