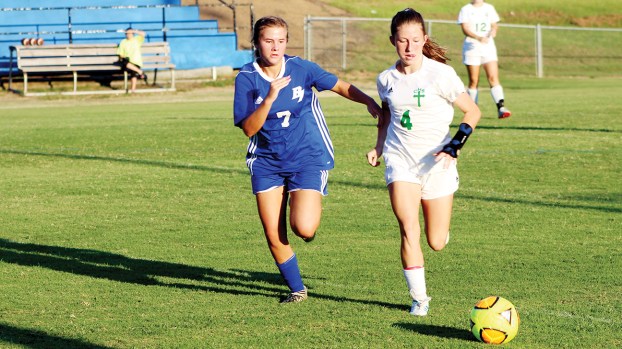 Photo by Cliff Furr Anne Elise Rounsaville of Brookhaven Academy fights for position on the ball against a Cathedral player Tuesday. The visitors from Natchez used three late goals to defeat Rounsaville and the Lady Cougars 3-1 in a district match.

Cathedral seized momentum late in their soccer match Tuesday at Brookhaven Academy, using a burst of scoring to tie the game and grab the lead as they rolled to a 3-1 win over the Lady Cougars in a district contest.

The loss was a bitter pill in a tough seven-day span for coach Mark LeBlanc and his team. Last Tuesday in a match against the Hattiesburg Forerunners — a homeschool-based team — BA lost senior goalkeeper Olivia Lewis for the rest of the season with an elbow injury.

Lewis went to break her fall with her right arm and in doing so dislocated and broke her right elbow. The pain came hard and fast as Lewis knew the injury was severe. Lewis cried when she got hurt and cried even more — harder — when she realized her senior season was finished.

“I was most upset to know that I won’t play again with my team this season,” said Lewis. “I got bumped on the play by a girl from Hattiesburg, but I don’t think she meant to knock me down and it probably would still have happened if she hadn’t touched me. She didn’t take any mercy on me though, she kicked the ball out of my hands when I was laying there and scored a goal.”

Lewis — who is polite, kind, and mild mannered off the field — has transformed into a fierce keeper in the last three years starting in the net for BA. She’s already been offered by the Southwest Mississippi CC women’s soccer program prior to her injury.

Taking the place of Lewis between the pipes is sophomore goalkeeper Amelia Anding.

The Cathedral match was tied 0-0 at half. BA went up early in the second half on a goal by junior Makayla Martin that was set up by a Lucie LeBlanc crossing pass.

Late in the match — with around seven minutes remaining — Cathedral got two quick goals to seize the lead. The first coming off a deft left-footed shot by Izzy Dupre. Dupre then added her second goal approximately two minutes later on a breakaway.

Cathedral soon added an insurance goal when Brookhaven had a hand ball in the box that led to a penalty kick that the Lady Wave converted.

LeBlanc says his team had a good plan that they followed closely before Cathedral broke through with their speed.

“Amelia was great in goal and overall our girls played very well,” said LeBlanc. “We just made some mistakes. Cathedral has a lot of speed and they eventually got behind our lines. We tried to bottle them up at midfield for as long as we could, but they eventually got some great balls through. Once they scored that first one, the momentum was theirs.”

The Lady Cougars (8-4) slide into second place in the district with the loss. They’ll face all their district foes once more with their next division matchup scheduled for Tuesday at Oak Forest. The Lady Cougars need to win that match, beat Adams County Christian and then hope to defeat Cathedral on the road Sept. 26 in the season finale by more than two goals in order to win the district title. A win over Oak Forest will assure BA a playoff spot as the second seed.

BA hosts the Laurel Lady Hawks tonight for a match that begins at 5 p.m.