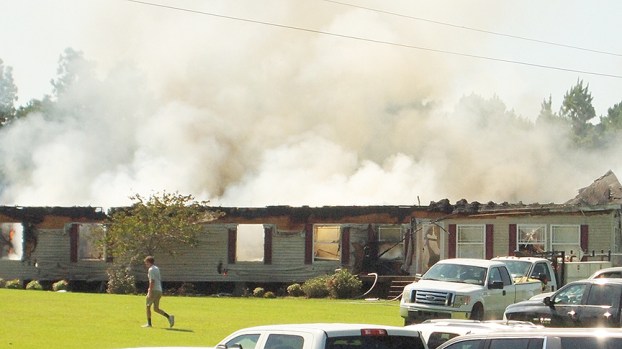 Photo by Luke Horton Volunteer fire fighters worked to extinguish a fire at 2119 Pleasant Ridge Road Wednesday morning. Neighbors helped to rescue as many items from the home as possible before flames engulfed the home.

Either a neighbor or a passerby saw flames at Billy and Renea Walker’s Loyd Star home just before 10 a.m. and called 911 to report the fire, Galey said.

No one was at the house at 2119 Pleasant Ridge Road at the time of the fire, but the yard quickly filled up with crews from Loyd Star and New Sight volunteer fire departments and at least one firefighter from East Lincoln, Galey said. Neighbors also arrived to help rescue as many items from the structure as possible before the fire engulfed the structure.

“They were able to save some of their keepsake pictures and that type stuff,” Galey said.

With limited tanker presence at the blaze from the volunteer departments, firefighters were forced to shuttle water from a hydrant at Jackson Liberty Road and Pleasant Ridge, he said.

“Everybody that was there did a good job,” he said.

The cause of the fire has not been determined and the incident remains under investigation, he said.

Thirty-two years amounts to a whole lot of shrimp and enough desserts to stretch from here to the nearest gym.... read more