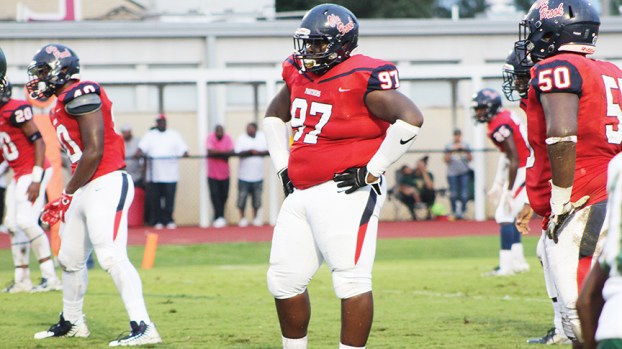 Photo by Cliff Furr Brookhaven High sophomore nose guard Caleb Harris and the Panthers will be in Forrest County tonight taking on the 6A Petal Panthers. BHS is one of three area teams playing in the Hattiesburg area tonight.

There will be a caravan of Lincoln County tags heading east on Hwy. 84 tonight as a trio of area teams play in the Pine Belt during week two of the regular season. All games kick off at 7 p.m. tonight.

Ole Brook fans will head for Hwy. 42 and the campus of Petal High School tonight.

“They’ve got a bunch of guys that do their job and do it well,” said Peavey. “We’re going to have to dig deep and fight for everything we get.”

Petal is 2-0 after wins over Hattiesburg and Harrison Central. The Panther defense has only given up three touchdowns thus far in 2019.

Quarterback Decarlos Nicholson, 6-foot-4, leads the Petal offense. Nicholson is committed to Gulf Coast C.C. and also holds an offer from the University of South Alabama. Senior running back Micah Mcgowen has run for a team-high 281 yards on 43 carries thus far this season.

In a 42-28 loss last week to Lawrence County, the Panthers got 205 yards on 25 carries from senior JQ Edwards. Edwards scored three times and averaged 8.2 yards per carry. BHS also got 89 yards and two scores on the ground from senior Byrion Robinson.

Brad Bland and his Bears are feeling better after picking up win No. 1 last week against Salem. Tonight, they’re in South Hattiesburg at the Sacred Heart sports complex.

Sacred Heart is under the direction of first-year head coach Ed Smith. The Crusaders lost 27-0 to St. Patrick in an all-Catholic school matchup last week. The 1A Crusaders were 2-9 last season and only began playing a full region schedule in 2013 after establishing the football program in 2009.

Against Salem, the Bears (1-1) got 79 yards on six carries from senior halfback Michael Brothern. Brothern scored one TD and his brother, sophomore Enrico Price, got a pair of scores. Price rushed 13 times for 111 yards and averaged 8.5 yards per carry.

Senior quarterback Travis Hall also had a big night on the ground as he ran eight times for 124 yards and a TD. The West Lincoln defense generated four turnovers against Salem.

The Enterprise faithful will travel east of Petal down Hwy. 42 into Perry County tonight for a matchup with the Richton Rebels.

Richton lost 32-21 to Enterprise-Clarke in week one and 34-0 last week to Perry Central. The Rebels, coached by Stephen Rice, finished 9-4 last season and beat Enterprise 51-6 when the two teams met in Lincoln County.

Last week, the Jackets lost 41-14 at Sebastopol. Sebastopol junior quarterback Jaden Mann was a one man wrecking crew against EAC. He was 10-of-13 passing for 175 yards and four scores. Mann also rushed 13 times for 154 yards and one TD.

EAC and coach Trey Woodard got 12 tackles from Jordan Stephens and 11 from Lawson Chemin in the loss. Stephens also rushed 10 times for 111 yards and one score.

The Bogue Chitto Bobcats are back at home Friday hosting the Springfield (Louisiana) High Bulldogs while their county rivals at... read more