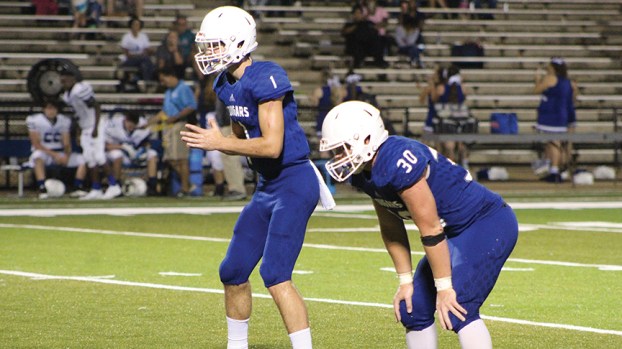 Photo by Cliff Furr The Brookhaven Academy Cougars will need a big night from sophomore quarterback Tyler Fortenberry and senior running back Nick Ogden. The Cougars are playing a Columbia Academy team that is 0-2, but both were tight losses to strong competition.

The Brookhaven Academy Cougars (2-0) host their annual “Pink Game” Friday on R.M. “Red” Stuard Field. The game is a tradition that coach Ron Rushing brought with him from Cathedral and has the Cougars wearing pink jerseys that honor friends or family who have battled cancer.

The Cougars are coming off a 46-7 win over Amite School Center in Liberty last week. It’s the first true home game for BA after they played week one at Co-Lin in Wesson.

Against ASC, sophomore quarterback Tyler Fortenberry went 12-of-23 for 226 yards and three scores. Dylan Fortenberry caught eight passes for 161 yards and one score. Tyler Fortenberry rushed six times for 62 yards and senior tailback Nick Ogden carried the ball five times for 53 yards and a pair of touchdowns. As a team BA gained 252 yards on the ground, led by 72 yards from Cohen Case.

The Cougar defense gave up little as the Rebels gained just 134 total yards. Trenton Tarver led the defense with 9.5 tackles. Trey Fortenberry chipped in 6.5 tackles and four of those were for a loss. Cade Watson also had four tackles for a loss.

Columbia (0-2) is coached by Randy Butler, a former longtime assistant at Southern Miss under Jeff Bower. The two Cougar teams haven’t met on the football field since 2016 when Columbia won 47-6.

CA dropped their season opener 20-12 at Simpson before losing last week 17-0 to Adams County Christian School. The Cougars are led by quarterback Ras Pace who is 22-for-49 on the season for 232 yards and two scores.

What to do with the city’s youngsters and derelict vehicles topped the discussion Tuesday at the meeting of the Brookhaven... read more