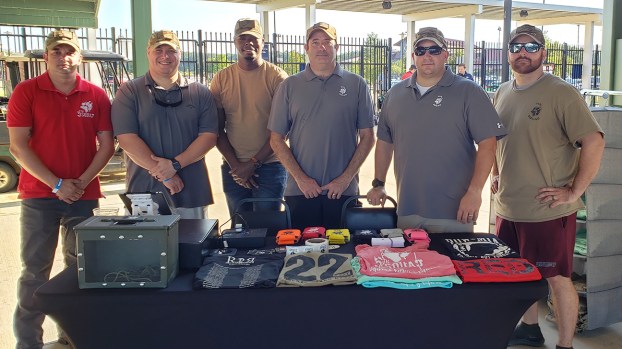 Money earned in ticket sales for Mississippi Braves games has raised more than $7,000 for the 5th Squad.

That means the combat veterans’ service organization has been able to help 15 veterans and their families in Mississippi just from ticket sales proceeds, said 5th Squad member Peter Griffin, a combat veteran now serving as a sergeant for the Lincoln County Sheriff’s Department.

The minor league team, based in Pearl, gave the organization half the price of $10 general admission tickets the group sold for one game a month and two games in August.

“It was very profitable for us and every penny made, like all the money we raise, goes back into the community as we try to fill the gaps and services for veterans that are unavailable elsewhere,” Griffin said.

“The VA can help with medical, but if veterans have a light bill they can’t pay, and we can document they’re a veteran, we can pay their light bill. We’ve paid for groceries and other utilities, and paid for car repairs so a veteran could get back and forth to work.”

Between the money raised from Braves tickets and other fundraisers, the 5th Squad has been busy this summer.

The 5th Squad provided yardwork for a woman whose husband was deployed with the Mississippi National Guard. One of the volunteers works a night shift, but spent his daytime doing yardwork, Griffin said.

Also, a veteran and single mother, working and attending college full-time, needed a helping hand for stable housing accommodations. The 5th Squad paid the deposit and the first month’s rent to get her on solid ground.

A trip to Gulfport helped a disabled veteran move into an apartment better suited to his disabilities.

In August, the group rounded up volunteers to help a disabled veteran move from a Jackson apartment complex to her new home two miles away.

And within two hours one hot August day, the 5th squad paid to get electricity turned back on for a veteran and his family. It doesn’t usually happen that fast, though.

“This is how you change a community, a state, and put actions behind words,” Griffin said. “Many of the veterans we help will never know who helped them.”

Every member of the 5th Squad is a combat veteran, and all the money it raises is spent on veterans in need in Mississippi, Griffin said. None of its leaders receive pay.

Oftentimes, referrals for help come from other organizations, such as the VA Veterans Family Services in Hattiesburg, he said.

The group also has a line of merchandise that is sold at expos, fairs and other events, such as at the Braves games for which the 5th Squad sold tickets.

The merchandise, which includes T-shirts, tank tops and mugs, is also available on the group’s website, 5thsquad.com. One of its T-shirts lists the names of all the 77 native Mississippi servicemen and women who have made the ultimate sacrifice since Sept. 11, 2001.

The group has an ongoing fundraiser with Hops and Habanas, a craft beer and premium cigar shop in Jackson.

Every other month, Hops and Habanas sponsors a cigar social that benefits the 5th Squad. The fundraiser charges $20 for a handmade cigar and two glasses of Colsons draft beer. The next social event is Sept. 14. Otherwise, for every Colsons beer ordered at any time, the business gives $1 to the 5th Squad.

Also, 51 Pawn & Gun in Bogue Chitto has donated a Windham rifle for raffle to raise money for the 5th Squad. The rifle is a TimberTec Camo SRC worth about $1,160, Griffin said.

Ticket are a $5 donation, and the rifle will be given away on Nov. 11, Veterans Day, in a Facebook Live event at the gun shop.

Tickets are available at the gun shop or from any 5th Squad member. Message the group through its Facebook page for ticket information.

The 5th Squad was founded in 2016 by four combat veterans who wanted to keep in touch and help veterans in need — Lee Stringer of Lincoln County and Adam Austin, Michael Collins and Zach Morehead.

The service organization received its name with a military background in mind. All military formations have four squads. The 5th Squad is not a part of the official formation, according to its website.

The group uses a wolf paw as its logo because, similar to a wolf pack, not all are part of the same blood family, but they have chosen to be a part of each other’s families.

The 5th Squad is also known for its Ruck to Remember (a march or run to honor veterans past and present) and Ruck for Rugrats (which delivers Christmas toys to the Batson Children’s Hospital in Jackson).

The Chamber wants to see your Hustle

Hustle on over to the Brookhaven-Lincoln County Chamber of Commerce and sign up for a vendor spot for the 45th... read more