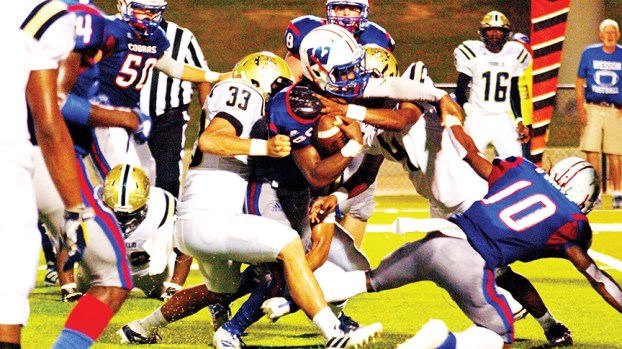 Photo by Cliff Furr Wesson junior Antrelle Sims is pulled down by a pile of Mize Bulldogs Friday night. Sims and the Cobras host Franklin County next week for homecoming.

On the strength of two long first quarter rushing scores the Mize Bulldogs took a 14-12 win over the Wesson Cobras Friday night in Stone Stadium.

Wesson’s final possession of the night came when the Cobra defense stopped Mize on 4th-and-goal from the 2-yard line with five minutes remaining in the game.

Needing to go 98 yards to get a go-ahead score, Wesson picked up a first down on 3rd-and-10 when freshman quarterback Will Loy scrambled in his own end zone and made a thrown on the run to Damien Smith. The play went for 32-yards out to the Wesson 34-yard line.

That would be it for the Wesson threat though, as a miscommunication on the following play led to a fumble that was recovered by Mize. The Bulldogs were able to run out the clock and end take the victory back to Smith County.

It was Loy’s passing that got Wesson to within two-points as he hooked up with Antrelle Sims for a 25-yard score with one-minute left in the third quarter. Sims is the starting quarterback but moved to wideout on the third and long before making a jumping catch to pull his team within 14-12.

Wesson had missed their PAT kick attempt on the first score of the night — an 8-yard scoring run by Smith with 2:39 remaining in the first half. Forced to go for a two-point try to tie the game, the Mize defense stuffed the running play by Wesson before it could get moving.

Anytime Wesson got within the Mize red zone the Bulldog defense would stiffen. In the first quarter Wesson went for it on 4th-and-goal from the 5-yard line before Mize stopped them.

During a possession that had them moving the ball in the second quarter Wesson fumbled and the ball was recovered by defensive end Kedrick Horton of Mize. Later in the quarter Wesson again went for it on 4th-and-goal and turned the ball over on downs at the 8-yard line.

Mize had the size advantage, but the Wesson defense was tenacious after giving up those two quick scores.

“Our defensive coaches came over and made the adjustments in the first quarter and I was really proud of how the guys played after that,” said Wesson coach Jeremy Loy.

Wesson was gang tackling and running to the football in the second half as senior linebacker Scott Hutt led the Cobra defensive charge. Collin McGowan, Terrance Haley, Justin Beall, Chris Davis, and Anterio Miller are just a few of the Wesson players who walled up the Mize offense late. Damien Smith recovered a fumble for the Cobras as well.

Coach Loy huddle his team in tight after the game to admonish them to keep fighting. Wesson lost 19-12 to Crystal Springs in their opener before being soundly beaten by Sumrall last week. Loy wants his team to stay in the fight and give the type of effort next week against Franklin County like they did on Friday night against Mize.

“Every game we’ve played thus far we’ve got four or five things that we do that are hurting us,” said Loy. “It’s just young mistakes or kids that haven’t played before, but we’re going to start getting it right. It’s not an issue of talent, it’s just experience. We’ve got six upperclassman that play, everyone else is sophomores or freshmen.”

Wesson hosts Franklin County next week for homecoming in Stone Stadium Kickoff is set for 7 p.m.

Wolves make plays to get past Northeast

Copiah-Lincoln, No. 17, beat Northeast Mississippi 14-7 Thursday night in Wesson. A beauty pageant it wasn’t, but it’ll go down... read more