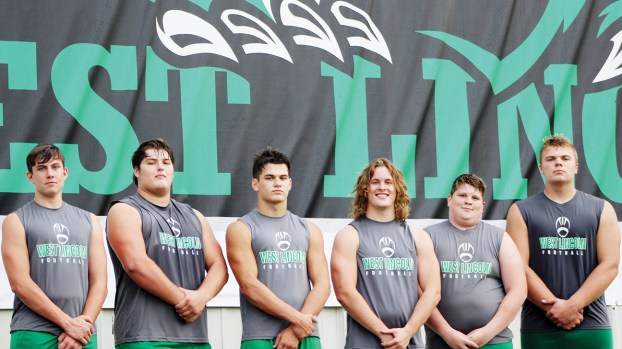 Friday night at Sacred Heart, the West Lincoln rushing attack was like one of those big rollers you pass on I-55 in the endless line of road construction. The kind with the big wheel on the front that mashes the freshly poured asphalt into the road base not with speed, but with power and force.

The Bears ran wild for 380 yards and six touchdowns in the 41-21 road win in Hattiesburg. For paving the way for their runners, the six men on the West Lincoln offensive line have been chosen as The Daily Leader Offensive Players of the Week.

The West Lincoln hogs make an impression when they set foot off the bus.

Senior Mississippi State commit Grant Jackson is a 6-foot-7, 315-pound tackle. Tackle Jackson Taylor clocks in a 6-foot-4, 315 pounds and the sophomore just turned 16 on Tuesday. Center Tate Smith is the little guy in the middle at 6-foot-1, 220-pounds. Smith is a junior as is guard Dylan Dickerson. Dickerson is rangy and long limbed where the other guard — junior Landon Greer — has more of a compact build. Tight end Cooper Moak is also a junior and has the responsibility of setting the edge for the offense.

Senior running back Michael Brothern carried the ball 10 times for 160 yards and four scores against Sacred Heart. Brothern broke off a 52-yard run against the Crusaders and averaged 16 yards per carry. His brother — sophomore running back Enrico Price — averaged 15.5 yards per carry and had two touchdowns runs as well. Price picked up 93 yards on just six carries and had a long run of 59 yards. Quarterback Travis Hall also ran for 60 yards against Sacred Heart.

Through three games West Lincoln has rushed for 869 yards and 12 scores. The team has an identity and a big part of that is built on the offensive line.

The season started with the Bears banged up and they took a 41-7 loss to Mize in their opener. Wins over 1A Salem and Sacred Heart have put a little bounce in the step of everyone in Flea Hop, but a big test is coming in the form of their homecoming game Friday against the Puckett Wolves.

Last season the Bears were 2-0 until a 28-6 loss at Puckett put them in a five-game losing streak. This season the Wolves look to be their usual salty selves. They lost 22-20 to Pisgah and 42-7 to Pelahatchie before beating Leake County 47-30 last week.

The WL line knows that as the season progresses and the competition gets stiffer, they still have things they need to improve on.

“I feel like we’re finishing blocks better now than we did at the start of the season,” said Dickerson.

“We’ve still got to clean up some penalties,” said Moak. “We don’t need anyone jumping offsides or holding.”

A former offensive lineman himself, head coach Brad Bland is glad to see his men in the trenches get some recognition.

“They’ve done a great job for us this season,” said Bland. “You’ve got to make the big boys feel good from time to time for the work they’re putting in.”