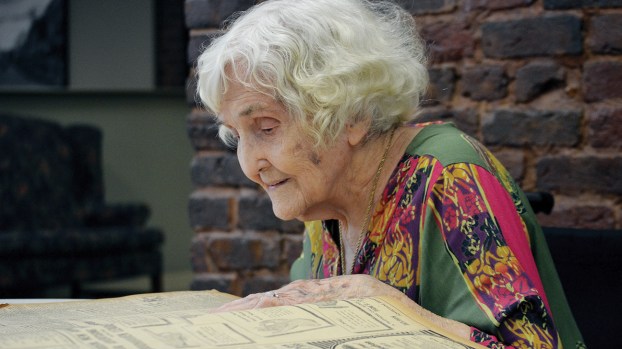 Photo by Donna Campbell Martha Diamond of Wesson, who turned 101 years old Sunday, looks through the pages of The Brookhaven Leader-Times from 1949 at The Daily Leader office Tuesday.

She’s a Diamond no longer in the rough

By all accounts, Martha Diamond has enjoyed a long and fulfilling life.

Diamond celebrated her 101st birthday Sunday. It was a small, personal gathering of friends from the Church of Jesus Christ of Latter-Day Saints. The year before, her 100th birthday bash was much larger, an event Diamond also attributes to her friends at the church.

“We’ve had wonderful friends,” she said. “The church friends have just been wonderful. They’re always there for you. And that’s the way we live.”

Diamond remembers her childhood living on a dairy farm near Hazlehurst fondly. She played ball with her five brothers. She remembers the first time she saw a car—a novel experience for someone born in rural Mississippi in 1918. Diamond is thankful for modern conveniences like air conditioning and electric stoves, but there was a lot for her to love about growing up in the 1920s.

“I’m so glad that I lived in that time, because it was such a good time,” she said. “There was an innocence, you know? We didn’t have a lot to play with, but we didn’t need it.”

At 19, Diamond was engaged to be married. But her fiancé at the time was in the military, and the Second World War was right around the corner. They had to wait. Diamond had gone to Shady Grove school with another girl, Mildred King, who was living in New Jersey at the time. When Diamond was 21, in 1939, King returned to Mississippi for a visit. When King went home, Diamond followed.

There in New Jersey, Diamond met her late husband and the love of her life, Frank Diamond.

“I fell in love at first sight with my husband,” she said. “Him, too. It was both ways.”

On Dec. 8, 1941, in response to the attack on Pearl Harbor, the United States officially joined World War II. Diamond’s husband, and all of her five brothers, had to go to war.

Diamond returned to Mississippi to live with her family while her husband fought in Germany. It was there she received some terrible news.

The bullet struck an artery on Frank Diamond’s shoulder, and at the time Martha was informed that Frank had been killed. Martha said it was a scary time, but later she learned that Frank had only been injured.

It was only through great effort that Frank survived. He had to undergo a difficult operation, and Martha said a treatment called penicillin — brand new at the time — saved his life.

“The ‘Wonder Drug’ came right along,” she said. “That and the sulfur drugs. They saved so many lives.”

The Diamond family moved to Wesson in the 1980s, where Martha still lives today. She has lived a good life, as she tells it — accepting the good with the bad. Even though she has plenty of friends from church to look after her, she maintains her independence.

“Age, it’s never bothered me,” she said. “I never think about age. I just go on with what I have. Whatever the Lord’s willing to give me, I take it with blessings.”

A fifth grade teacher at Lipsey Middle School now has a voice on K-12 education, hindrances to success and recommendations... read more