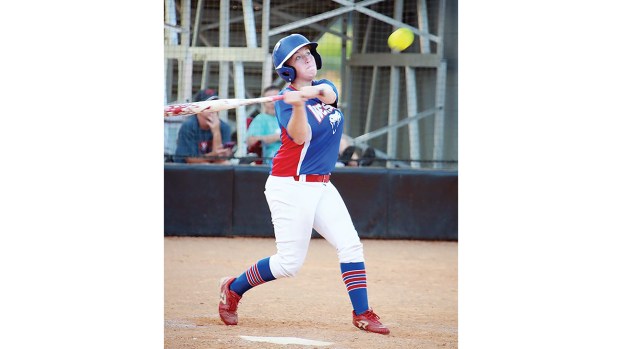 Photo by Ann Clark Laynee Crapps and the Wesson Lady Cobras next play Saturday at 2 p.m. against North Pike in the Brookhaven High Tournament. The Lady Cobras also play Vicksburg at 4:30 p.m.

The Wesson Lady Cobras were victorious in a home district slow-pitch match-up against Franklin County on Tuesday.

Franklin struck early by putting three runs in the top of the first off a walk, a hit and a couple of errors by the Lady Cobras.

Wesson didn’t waste any time as they tied things up in the bottom of the first as Shelbi Maxwell reached by way of walk, Anna Claire Crow singled and then senior slugger Catherine Wilson drove a double off the wall to score Maxwell.

Sophomore pitcher Kyla Smith drove Crow in with an RBI single and Chloe McManus had an RBI single as well, and after one inning of play the game was tied at 3-3.

In the second inning, Franklin County went three up and three down. Wesson took their first lead in the bottom of the second as Maxwell reached safely again and Catherine Wilson picked up her second RBI of the game with a sacrifice fly to put the Lady Cobras up 4-3.

The Wesson defense held the Lady Bulldogs scoreless the rest of the way. Wesson added another run in the third inning as Smith scored on a hit by Alaina Westrope. Wesson got one more run in the sixth as Maxwell scored again on another RBI by Wilson.

Offensively, Wilson finished the game with three RBIs and Crow went a perfect 4-for-4 at the plate. Wesson and coach Michelle Nunnery are back in action Saturday at the Brookhaven High Tournament. They’ll play North Pike at 2 p.m. and Vicksburg at 4:30 p.m.

“We still didn’t hit great but at this point and in a district game, a win is a win, and we’ll gladly take it,” said Nunnery.  “Proud of the girls for finding a way to get the job done tonight.”

Coming off a 14-7 defensive battle against Northeast, the No. 11 ranked Co-Lin Wolves turn their attention to MACJC South... read more