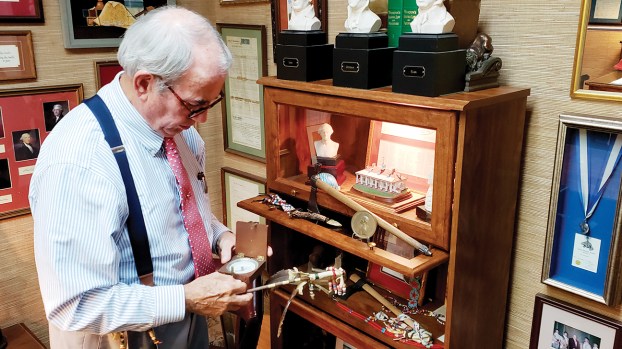 Photo by Donna Campbell Attorney Joe Fernald goes through some of the items he’ll bring for “show and tell” Sept. 26 for a program on the Lewis and Clark Expedition and how a group of Brookhaven Boy Scouts made history.

A show-and-tell program about the Lewis and Clark Expedition will make history come alive as Joe Fernald talks about his travels along trails that ultimately shaped the geography of America into what it is today.

He will speak about the famous expedition at the Lincoln County Historical and Genealogical Society’s program Sept. 26. The program, free to the public, will be at the Jimmy Furlow Senior Citizen Center, 201 S. First St., starting at 6:30 p.m. Refreshments will be served following the presentation.

Fernald said he plans to have about 40 exhibits — copies of documents, paintings, artifacts, beads, knives, peace medals and other Native American regalia.

President Thomas Jefferson, who requested the expedition, later designed peace medals that were given to Native Americans the explorers met along the way.

“Every Boy Scout from our troop to make the trip has received a peace medal,” said Fernald, who bought the medals for them.

The expedition, also called the Corps of Discoveries, was led by Capt. Meriwether Lewis and Lt. William Clark. The trip, from May 1804 to September 1806, was the first American expedition to cross “unknown” territory that would become the western part of the U.S. Members of the expedition used boats, then horses before they reached the sea.

“Our country was not what it is now,” Fernald said.

“And were it not for the expedition, Mississippi could have remained the western border of the United States,” Fernald said.

A local Boy Scout troop a few years ago made history of their own, he said. The group Fernald was leading traveled to an area called Goat Island in the middle of the Missouri River. Fernald and the Boy Scouts read a copy of a journal, written by Lewis, that described a magnificent view that included buffalo and antelopes.

Fernald and the troop checked the longitude and latitude Lewis had written down and their own location, and realized they were standing where the explorers had stood 200 years earlier.

“We commented that, except for the lack of buffalo and antelopes, the view looked the same way Lewis had described it,” Fernald said. “The Boy Scouts received an award for confirming the location from the state historical association.”

“One of the boys said he felt like he was in church. It’s very rare you get to stand in the location of a historic place.”

The Boy Scouts also visited the Spirit Mound, an area believed by Sioux Indians to be haunted by evil spirits.

The Lewis and Clark expedition had an indirect effect on Mississippi in that it opened up roads badly needed for commerce, Fernald said.

Some members of the Corps of Discoveries had been in Mississippi, Fernald said.

“Jefferson didn’t want Mississippi to fall in the hands of the Spaniards or French or England,” he said. “They had to be able to move troops and goods. Natchez at the time had one of Mississippi’s main ports.”

The Sept. 26 program will be colorful and may touch on “some of the most scurrilous people to ever live,” Fernald said.

Jefferson commissioned the expedition shortly after the Louisiana Purchase.

The troops were to explore and map the new territory and find a route across the western part of the continent. They wanted to find an all-water route to the sea on the land’s west side; that was not to be. But officials secretly wanted to establish an American presence before Britain and other European powers could claim new territories, he said.

A secondary object was to study the new regions’ plants, animal life and geography, and to set up trade with Native Americans.

The Wesson High School Band wants to send a lucky winner on a Florida theme park vacation or at the... read more