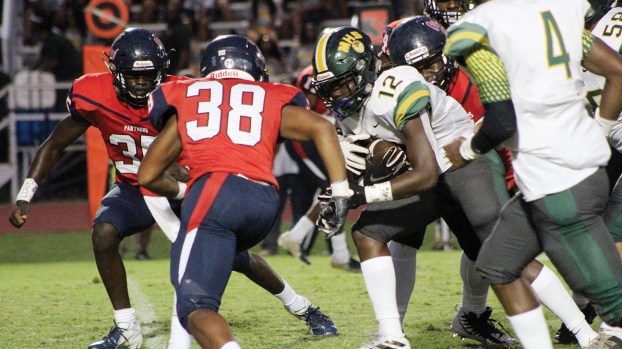 The Brookhaven High Panthers (1-3) spotted the McComb Tigers a two-score lead Friday night on King Field. When BHS did wake up they roared to 21 unanswered points in a 21-19 win.

Leading 14-13 in the fourth quarter, Brookhaven got their insurance score when Byrion Robinson took a screen pass 40-yards for a score. Robinson broke four tackles as he raced to the end zone.

With 12 second left McComb (3-1) scored to pull within two points. A long pass got the Tigers down to the 1-yard line and they then scored on a keeper by quarterback Chris Roberson to narrow the lead.

The Panther defense stopped a McComb 2-point conversion attempt to secure the win as a Roberson pass sailed out of the back of the end zone after pressure from BHS. The subsequent McComb onside kick went out of bounds to end the Tiger threat.

McComb was efficient in the first half as they drove down to score on their first drive of the game. Roberson is an athletic threat who can pass or run when the ball is in his hands. The second McComb drive was just as good as they jumped to a 13-0 lead in the first quarter. The first scored came on a Roberson run and the second on a pass from the talented QB.

BHS got on the board in the first half via a big Robinson scoring run and a fumble recovery by Kadarius Wells that went for six points. Trace Brady was a crucial 3-for-3 on PAT kicks for BHS.

The 14-13 Brookhaven halftime lead held for most of the second half until Robinson took the screen to paydirt.

Sophomore quarterback Dre Ross had his best passing game of the season as he finished 8-of-11 for 131 yards. The BHS offense was missing senior running back JQ Edwards and senior wide receiver Jontavius Wilkinson to injuries.

Ole Brook head coach Tucker Peavey was pleased with the adjustments made by his defense.

“We played a lot better,” said Peavey. “We were running to the ball faster. We’re young and learning, but if we keep battling we’ll be a good team. Proud of our guys. Their quarterback is a special player.”

Brookhaven is off next week and McComb plays at Wilkinson County.

The Wesson Cobras (1-3) broke into the win column in a sweet way Friday night with a 29-6 homecoming win... read more