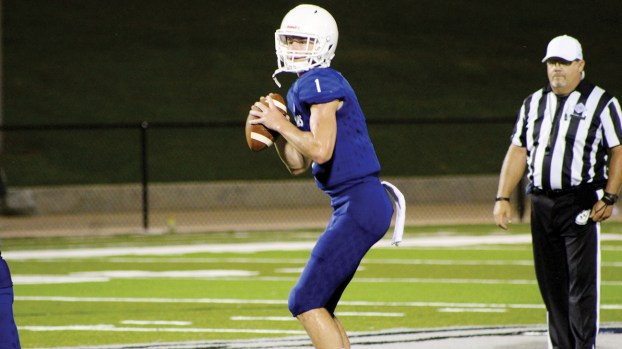 Brown TD is game-winner for Cougars

The Centreville Tigers (1-3) had given Brookhaven Academy their best shot in the fourth quarter Friday night. After grabbing their first lead at 20-17 the Tigers saw Brookhaven drive down the field on the arm of sophomore quarterback Tyler Fortenberry. With 2:24 remaining in the game it was freshman running back John Rivers Brown who broke the big play BA needed. Brown dashed in from 35-yards to put the Cougars back up in a game they’d win 24-20.

Brookhaven Academy (3-1) was facing a strong Centreville rushing offense that they kept at bay for most of the night. The Tigers got strong field position on a punt return before their go-ahead drive.

On a 4th-and-goal from the 1-yard line the Tigers grabbed the lead on a Jaden Morris dive with 4:46 remaining in the game.

BA started fast as Fortenberry found his cousin Dylan for a 5-yard TD pass with less than two minutes off the clock in the first quarter.

CA finally got on the board with 25 seconds remaining in the first half when Kason Clark ran in from six yards out. Clark would add another rushing TD in the third quarter.

A two-yard scoring run by Tyler Fortenberry put BA up 17-8 with 6:32 remaining in the third quarter to make the game 17-8 for BA.

Clark then got his second score to cut the lead to 17-14 before the Morris run put CA up late in the game. Rob Johnson got an interception to stop the final last-gasp Centreville drive.

Tyler Fortenberry rushed 14 times for 150 yards. He was 10-of-26 passing for 110 yards. Defensive ends Trey Fortenberry and Gage Brown were among the tackle leaders for the Cougars. Brown finished with 12 tackles, a sack, a forced fumble and a fumble recovery.

The Cougars open district play next Friday with a home game against Cathedral for homecoming.

All four of the Lincoln County schools will play football at home tonight — a combination that will happen just... read more