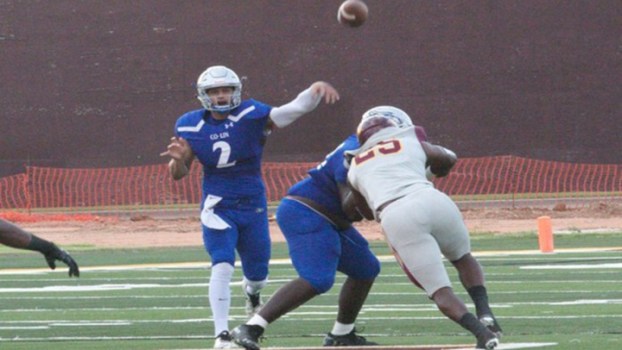 Photo by Co-Lin Athletics Information Copiah-Lincoln quarterback Danny Clark went 19-of-35 for 415 yards and four touchdowns Thursday in a 32-9 win over Pearl River. The No. 11 Wolves will next play at No. 4 Northwest in Senatobia on Thursday.

Co-Lin’s passing game dominated Thursday night, while the defense locked down, as the No. 11 Wolves outgained the PRCC Wildcats 521 yards to 72 in a 32-9 South Division victory. Co-Lin was led by signal caller Danny Clark who racked up 415 passing yards on 19-of-35 passing with four scores. The left-handed quarterback connected with seven different receivers who were led by Antoine Robinson who hauled in six receptions for 198 yards and two touchdowns.

The win moves Co-Lin to 3-0, 1-0 on the year, the first time since 2015, and drops the Wildcats to 1-2, 0-1 on the young season. The win sets up a massive matchup next week as Co-Lin travels to Senatobia to face the now-ranked No. 4 Northwest Mississippi Community College Rangers. Kickoff is slated for 7 p.m.

After back-and-forth punts early in the first quarter, the Wolves took over at their own 40-yard line. The drive looked to stall early with a third and 11 situation, but Clark connected with sophomore Malik Heath for a 33-yard gain. Clark followed with a great ball to wide-open Robinson in the corner of the endzone for the first score of the contest. The ensuing PAT failed, giving Co-Lin an early 6-0 lead midway through the first.

The Wolves did not get on the scoreboard again until the second quarter when Bryce Lofton pinned the Wildcats at their own one-yard line with a whopping 57-yard punt. Co-Lin’s defense capitalized on the opportunity for the second straight week as Hayden Hill and Khehlan Kennedy wrapped up a Wildcat rusher for a safety stretching the lead to 8-0.

Following the safety, the Wolves wasted no time marching down the field again. Clark hit Robinson for a huge 45-yard gain before capping off the four-play, 64-yard drive with a 21-yard touchdown connection with Heath. Lofton’s point-after sailed through the uprights growing the lead to 15-0.

After a PRCC three-and-out, the Wolves continued the high-octane offense as Clark found Dawson Brown for a 26-yard gain on a third and six situation. The quick strike that kept the drive alive paid off as the Ohio native hit Heath for his second score of the game, this time from 49-yards out. The score put the Wolves up 22-0 with 3:48 remaining in the half.

Co-Lin threatened late in the second quarter after a quick Pearl River punt. Clark led the Wolves down the field with a deflected connection to Co-Lin’s Jalen Armstrong, an offensive lineman, for a 23-yard gain, followed by a 35-yard toss and catch to Robinson. Unfortunately, a blocked 36-yard field goal was scooped and scored by the Wildcats with just 22 seconds remaining the opening half. After the PAT, Co-Lin took a 22-7 lead into the locker room.

After yet another PRCC three-and-out, Co-Lin went for the long ball. The gut-punch play call paid off as Clark airmailed a 57-yard touchdown pass to Robinson. The score put the Wolves on top 32-7 with 9:01 remaining in the third quarter.

Pearl River got two points back midway through the third when a bobbled snap on a punt from Co-Lin’s own end zone resulted in a safety.

Co-Lin head coach Glenn Davis began pumping the breaks in the fourth quarter as a variety of players checked into the game and the offensive  tempo slowed. The Wolves kept the clock rolling and secured the 32-9 victory.

The Wolves’ 521 yards is the first 500-yard performance since the team piled up 532 yards last season in a 42-17 win over East Central Community College. Clark’s 415 passing yards is the first Co-Lin 400-yard game since Daniel Fitzwater threw for exactly 400 in a 37-13 season-opening victory over Itawamba in 2014.

Co-Lin’s rushing attack was led by Lakenith Thompson who racked up 38-yards on nine carries. Robinson’s 198 yards and two scores led the receiving corps and is the first 150-yard receiving game since Donald Gray racked up 158 against Jones College in 2014. Heath finished with 103-yards on three receptions for two touchdowns, while Brown posted 50-yards on four catches.

Defensively the Wolves were led by Tavarian McCullum with six tackles, while Natrone Brooks and Hill both wrapped up five each. Co-Lin posted five tackles on the game with Brooks and Jaxavier Hicks both posting one, while Jalen Ware wrapped up two. Lawilliam Holmes and Demetrius Swilley both posted half a sack each. Lamar Gray, Xavier Curry, and Tyrus Wheat all finished with interceptions on the night.

Without digging into the record books it’s safe to say that West Lincoln played in the highest scoring game in... read more