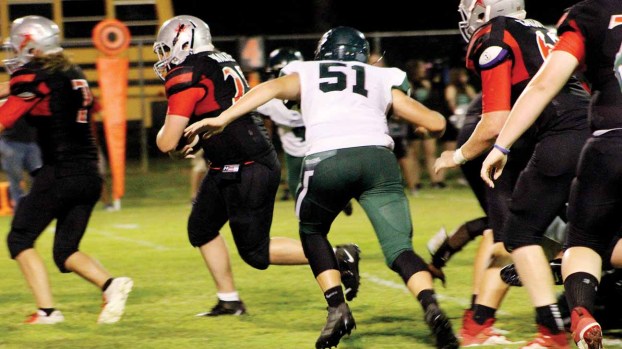 Photo by Cliff Furr Loyd Star sophomore fullback Bryson Walker tucks the ball on a rush that would take him down to the one-yard line Friday night. Walker would score on the next carry to give the Hornets their lone TD of the game.

The Pisgah Dragons (4-0) were too much for the Loyd Star Hornets (1-3) to handle on Friday night as the visitors from Rankin County took a 41-7 win on W.E. “Sambo” Smith Field.

Trailing 20-0 at halftime, Loyd Star coach Brian Ford and his team put together a strong drive to get on the board. The Hornets received the opening kick and used their running game to move down the field.

Runs by Thomas Kelly and Julius Smith got the Hornets close. Facing 4th-and-1 from the Pisgah 12-yard line, Ford elected to go for it.

A fullback dive went to sophomore Bryson Walker. Walker burst through the middle of the Dragon line and made it down to the half-yard line.

On the next play Ford gave the ball to Walker again as he plunged into the end zone for the lone Loyd Star score.

The Hornets are still don’t have a complete roster as multiple players are working back from injuries.

“We’ve got a few guys hurt that we need to get better and we need them to get well soon before we start region play,” said Ford. Loyd Star leading rusher Versie Wilson was limited in the game. Junior running back Eric Birch played but did not carry the ball after being out for most of the season.

“We’re going to turn Eric loose next week and let him carry the ball,” said Ford.

Next week for the Hornets is a trip to Attala County to take on McAdams.

Brown TD is game-winner for Cougars

The Centreville Tigers (1-3) had given Brookhaven Academy their best shot in the fourth quarter Friday night. After grabbing their... read more