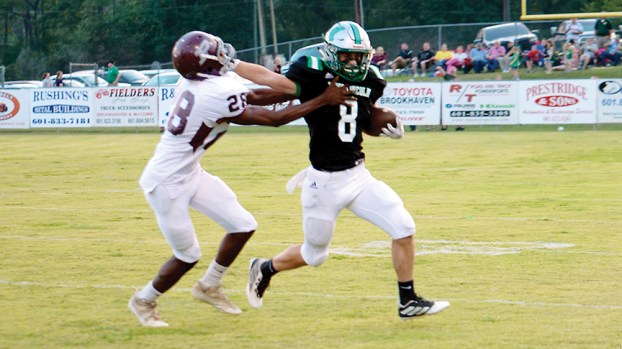 Photo by Teresa Allred West Lincoln senior Logan Smith fights for yards Friday against the pressure of a Puckett defender in the first half.

Without digging into the record books it’s safe to say that West Lincoln played in the highest scoring game in school history Friday night. Unfortunately, the one stop Puckett got all night was enough as the visiting Wolves from Rankin County took a 60-57 win in Flea Hop Friday night.

The Bears (2-2) had the ball the Puckett 25-yard line and were driving for a go-ahead score when the Wolves (2-2) got the game sealing stop on homecoming for WL.

The Bears will replenish their electrolytes this week before traveling to play the St. Joseph Bruins on Friday.

It was a typical Friday night in Bogue Chitto as the Bobcats hosted the Mize Bulldogs on Troy Smith Field.... read more