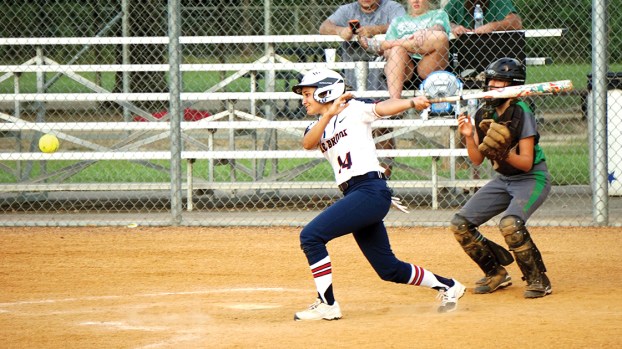 A day filled with slow-pitch action at Lady Panther Park saw the homestanding Brookhaven High Lady Panthers finish 2-0 in their own tournament Saturday. Their region mates from Lawrence County were also 2-0 as Bogue Chitto and Wesson each lost a game and won a game on the day.

Coach Mandy Vinson and her crew picked up a 5-1 win over Meridian and then blasted the Vicksburg Missy Gators 14-2 to close out the tournament.

Kyla Henderson was the winning pitcher was BHS had zero errors defensively behind her.

Henderson had a double in the win over Vicksburg while also picking up the pitching win. Foster and Wilkinson had two hits each against VHS. Also hitting safely for BHS in the win was Nations, Cook, Woodall, Coghlan and Madi Miller. Miller and Wilkinson drove in a pair of RBIs each.

The Lady Panthers have a pair of home games this week as they host Florence tonight and Bogue Chitto on Thursday.

Coach Marc Howard and his Lady Cougars (8-4) had their bats heated up in a 17-1 win over Warren Central and a 14-3 victory against Meridian.

LC is averaging 15 runs per game during their current five game win streak.

Ashley Holden and Sydney Pevey had a home run each in the win over WC. Holden hit a grand slam and Pevey added a double and piled up six RBIs in the win.

In the win over Meridian the Lady Cougar had 20 hits as Speights hit a home run while Stephens belted a triple. Bridges, Hartzop and Holden all hit a double apiece. Ready had a team high three hits.

The Lady Bobcats dropped a 14-3 loss to North Pike in their opener before bouncing back for a 13-7 win over Warren Central in game two.

The loss for Bogue Chitto (9-3) against North Pike was the second of the season for the Lady Bobcats to the Lady Jaguars.

BC was done in by eight errors and only three hits in the loss to NP.

Julianna Frazier was the powerplant in game two as she had five RBIs in the win over WC. Frazier hit a grand slam and a double. Kylie Chapman and Shyann Jackson also hit homeruns for the Lady Bobcats and Julie Anna Bartram hit a pair of doubles.

The Lady Cobras dropped their first game 8-3 to North Pike and bounced back with a 4-1 win over Vicksburg.

An Anna Claire Crow triple in the third scored Shelbi Maxwell to get the Lady Cobras on the board against NP.

The Lady Cobras are at Lawrence County today and will host North Pike Thursday.