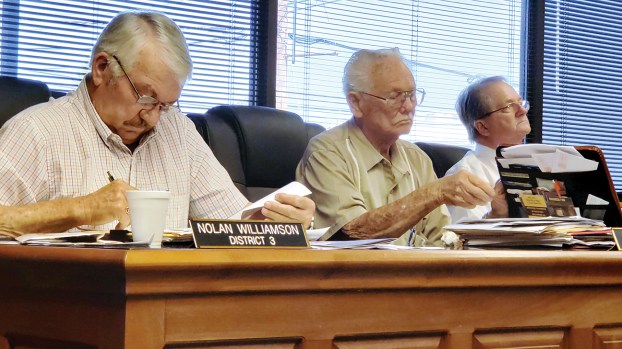 Supervisors stared at each other as the clock ticked down the minutes during a public hearing Monday before one gave in and made a second, opening the way for a 4-1 vote to approve the county’s $21.68 million budget and a hike in ad valorem taxes for fiscal year 2020.

The Lincoln County Board of Supervisors approved the budget, which goes into effect Oct. 1, with just District 5 Supervisor Doug Falvey voting against it.

At the beginning of the public hearing, held an hour into the regular board meeting, County Administrator David Fields explained the figures to supervisors and for three minutes they flipped through the printed pages of the budget.

District 1 Supervisor Rev. Jerry Wilson, president of the board, asked Fields to repeat it, but made no other comment.

District 2 Supervisor Bobby Watts, who is retiring in December, broke the silence after a few minutes and made a motion on his last county budget.

“Well, every year at this time and hour, everybody ain’t satisfied, but you may as well be. We’ve got to go one way or the other, so I think we get the best we can. You can’t satisfy everybody, that’s for sure. Never have and never will, but I believe one thing for sure. We’ve got a good number here. I like all of y’all and him and him and the one in the corner,” he said, pointing to Chancery Clerk Tillmon Bishop, County Administrator David Fields and County Engineer Ryan Holmes. “And I think everything will work out right as honest as we are. Amen.”

Wilson asked for a second, but District 3 Supervisor Nolan Williamson asked Fields how the additional 2-mil tax levy would be divided.

“All of the money gets split up — when we levy bridges and roads it’s one levy — but it gets broke down by road miles,” he said.

The more miles a supervisor is responsible for maintaining, the more money received.

It was another two minutes of silence in the boardroom before Williamson got up.

“Died for a lack of a second? It sure did,” he said, walking out.

After a few minutes he returned.

“I ain’t raising no kind of taxes,” Williamson said.

District 4 Supervisor Eddie Brown said they would also benefit from the additional money the 2-mil tax levy would bring.

“Every one of us gains to help with blacktop. There’s not a man in here that don’t need that money,” he said.

“Well, second it then,” Williamson said.

Williamson asked if cutting his part of the money out would lower the tax levy by a mil, but Fields said it wouldn’t.

After several more minutes of silence, Wilson asked if Falvey was going to second Watts’ motion.

Falvey just asked for clarification on the amount the county earmarks for economic development.

“What are you going to do Bro. Nolan?” he asked.

“There’s five sitting around this table,” Williamson said. “What are you going to do?”

“Will we have another opportunity to meet on it again?” Wilson finally asked.

Fields reminded them they needed to vote on it Monday to meet state requirements.

“Bro. Nolan will get the most. I’m the one to get the least of it,” Wilson repeated.

Williamson then questioned payroll and the amount the county spends on salaries.

Wilson said the motion would die without a second and walked out.

Bishop suggested they consult Robert’s Rules of Order to see how long the motion could live without a second.

After a few minutes Wilson returned and Williamson said he doesn’t want supervisors to buy anything beside rocks, tar and asphalt with the 2-mil increase if he votes for it.

Thirty minutes after they started, Wilson asked for a second again.

“So we’re going to let it die for a lack of a second?” Wilson asked. “We’ve gone on quite some time, just trying to let everybody air it out. I’m getting less money than you all. Y’all do a lot of paving. I’m doing what I can.”

He said they needed to make the tough decision.

“I second it,” Brown said, slamming his palm down on the table.

Williamson asked supervisors to only spend the tax money on road materials.

“I can see a smile on every one of your faces now,” Brown said.

But supervisors were still at a standstill with just a motion and a second.

Williamson was still concerned the money would be spent on more than asphalt and other road material.

Wilson questioned Falvey’s ability to vote against the budget but still get his share.

“If they don’t support it, take them out and they don’t get anything for a year. We can’t do it, but it should be done that way,” he said. “He’s going to get it regardless of what we do. That’s what gets me.”

“Bro. Wilson, the reason I’m going to get it is the taxpayers of Lincoln County District 5 is going to get increases like the others in four districts so they’re paying the money whether I voted against it or for it,” Falvey said.

“We get criticized,” Wilson responded. “I get sick of that mess and here we are trying to do what’s right.”

In the end, nearly 40 minutes after the hearing started, Williamson and Wilson voted to approve the budget.

Expenditures include $9.93 million for the general fund, $3.26 million for road funds, $2.11 million for bridge funds and $6.34 million for other funds, for total expected expenditures of $21.64 million. That’s a 2.92 percent increase in anticipated spending.

The county will operate under a proposed 110.71 millage rate, which is 57.33 mils for the county and 53.38 mils for the Lincoln County School District.

Brookhaven police are asking for the public’s help to find a suspect accused of shooting a man Saturday at an... read more