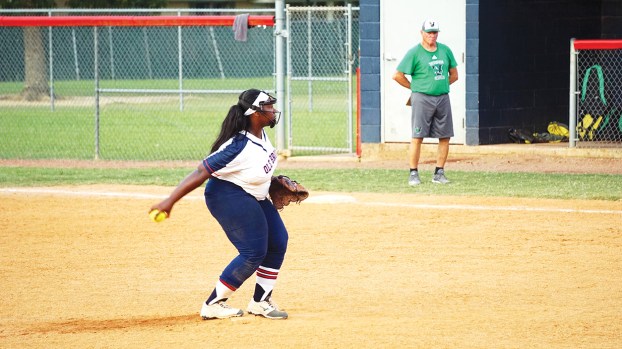 Photo by Gerri Miller Brookhaven High pitcher Kyla Henderson and her team have won four games in a row after starting the week off with wins on Monday and Tuesday. The Lady Panthers are on the road tonight as they travel to Bogue Chitto to face the Lady Bobcats.

Coach Mandy Vinson and her Brookhaven High Lady Panthers (12-7) have won four straight games as they head to Bogue Chitto tonight at 6:15 p.m. to face coach Kris Smith and his Lady Bobcats (9-4).

On Monday night the Lady Bobcats were downed 7-2 by Lawrence County at home. BHS and BC met on August 13 and Bogue Chitto won that game 5-3. They met again two weeks later in a game Brookhaven High took by a 13-9 score.

Monday BHS went on the road and piled up 19 hits in a 17-9 win over Vicksburg in Warren County. Lulu Cook and Layla Woodall had a home run each to pace the Lady Panther offense. Lynsey Nations smacked a pair of doubles and Meg Foster, Madi Miller, Kaysha Register and Woodall all hit one double apiece.

Nations and Woodall had four hits each as Cook drove in a team high three RBIs. Kyla Henderson, Kyja Willis and Angel Wilkinson all also hit safely for BHS.

It was more of the same on Tuesday as BHS again got 19 hits, this time in a 15-1 win over Florence.

The senior Cook hit two dingers this time as she led the team with five RBIs. Nations also hit a round-tripper and added a triple as well. Wilkinson hit a pair of doubles and Foster had a double as well.