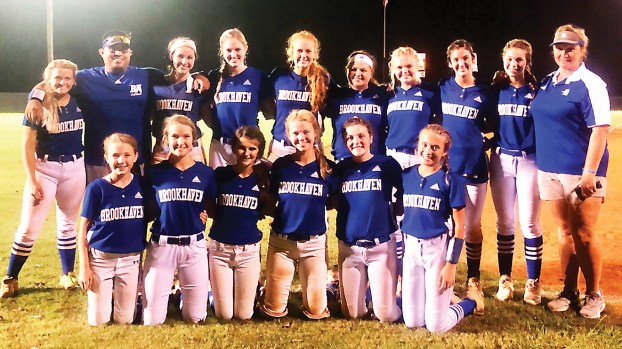 Photo submitted The Brookhaven Academy Lady Cougars are MAIS District 4-4A champs after finishing the regular season with a 7-1 division record. Head coach Becky Flowers, assistant coach Jose Acosta and their team are back on the field Saturday in the 4A South State Tournament in Magee. BA plays at 10 a.m. against Discovery Christian from Florence.

The Brookhaven Academy Lady Cougars (25-4-1) put a bow on their regular season this week with a 7-1 win over Oak Forest Academy Monday and a 13-1 win Tuesday against Cathedral. The first victory wrapped up the regular season MAIS District 4 championship for coach Becky Flowers and her squad as they finished division play with a 7-1 record.

The postseason begins on Saturday for BA as they’ll travel to Magee for the MAIS 4A South State Tournament. First up for the Lady Cougars is a 10 a.m. game Saturday against Park Place Christian Academy. The tournament is double elimination, features eight teams and concludes on Monday. BA won south state last year in the old MAIS AA classification.

On Monday the Lady Cougars faced Oak Forest (9-15) and their 6-foot-2 LSU signee Emilee Casanova. Casanova struck out 12, but as they did earlier this season, the Lady Cougar’s bats produced hits and runs off her.

Madison Moak led the offensive attack with a pair of doubles. Emily Claire Felder and Madi Smith also had a double apiece.

Smith went the distance in the circle for the blue and white as she pitched a gem. Smith gave up two hits and one earned run in seven innings. She needed only 97 pitches to get the win as she struck out four and walked four.

The game Tuesday against Cathedral (11-14) was a makeup from an earlier rain-out.

Goodson drove in a team high five RBIs as she hit a double and a home run. Richardson and Smith also homered while Felder and Richardson had a double each. Moak, Hallie Creel and Reagan Newman all hit safely in the win.

Felder pitched the complete game and struck out eight on 56 pitches while giving up three hits and one earned run. She did not issue a walk.

The district title was the first in fast-pitch for the school. As good as BA has been over the last three seasons — a combined 84-26-4 — they had previously been foiled from the district crown by their old rivals Clinton Christian.

“Winning district is a big deal because we’ve always kind of had to claw our way into the postseason,” said Flowers. “We started in the driver’s seat this year and hopefully that will give us a little advantage moving forward.”