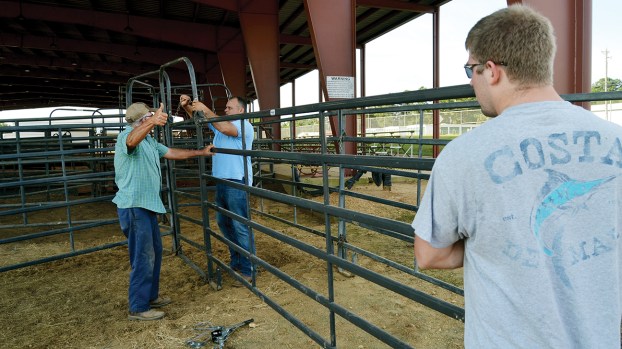 Photo by Donna Campbell From left, Henry Ballard, Quinn Jordan and Blake Burns adjust and assemble fence panels in the arena at the Lincoln Civic Center in preparation for use by rodeo associations in the fall.

It’s a dirty job getting the rodeo arena ready for racing, but it’s the dirt that is attracting equine groups to the Lincoln Civic Center.

“Dirt is a science,” said Director Quinn Jordan. “We’ve got one of the best dirts.”

The dirt that covers the floor of the Lincoln County arena holds the horses well without getting too hard between runs.

“So when the horse goes into the pattern, he’s able to set hard, make that turn, without either slipping if it’s too loose or if it’s too hard, jamming his front end,” he said.

It took three attempts over three or four years to get it right. Jordan called arenas around the nation and most suggested a “good brown topsoil” for a base.

Jordan said they found exactly that when they were building the baseball fields near the arena. They mined a lot of dirt during the construction and banked it in a location nearby that’s easy to get to.

Now that they have the right stuff, the equine network is buzzing with good recommendations, he said.

“The dirt in a rodeo arena is the most important thing that they’re looking for,” he said. “Having a good dirt that’s workable that they feel is safe for their horses, because these people invest a lot of money.”

The Mississippi Junior High and High School rodeo associations rent pens in the fall in Lincoln County to host events.

Jordan said another high school rodeo event may come to Brookhaven, but the deal hasn’t been finalized.

The laser system allows more consistency for patterns. Instead of marking barrel, pole and electric eye positions with stakes driven into the ground, laser stakes mount magnetically to the ceiling of the arena to mark positions with a beam of light. This allows for easy set-up and more accuracy after each drag during a show.

The arena floor is plowed, or dragged, after every fifth horse and the barrels and poles must be moved. With a laser beam pinpointing the location, it’s easy to replace them in the exact same spot, he said.

There are 13 lasers mounted on the arena ceiling.

“Because we did that, we had someone considering moving their shows here and they moved six shows here,” he said.

Just like the recent Little League World Series, rodeos bring in people who spend money in Lincoln County, he said. They buy diesel and food and usually make other purchases.

“People with $100,000 rigs pulling in, visiting Brookhaven and Lincoln County,” he said. “It brings in people with disposable income who may not have ever come to Brookhaven or may need a reason to come back.”

The LCC Foundation funded the $3,700 laser system and also the $4,500 needed to repaint iron gates and panels in the arena and fences around the RV park.

The panels are 23 years old and must be sanded and repainted every few years to increase the life of them.

“Those are improvements we could not do without the support of the foundation,” he said.

The arena is open to the public seven days a week, except when it’s rented for an event.

“We’re one of the only horse parks that are open every day for the general public to come ride for free,” Jordan said.

The public riding schedule is posted at the arena gate and Jordan notes any closures or changes on the Lincoln Civic Center Facebook page.

Each day the dirt is set for a certain depth, based on the discipline that will be using it, he said.

A Brookhaven alderman expressed regret Tuesday at a vote earlier this year that supported vaping businesses in the city. “I... read more