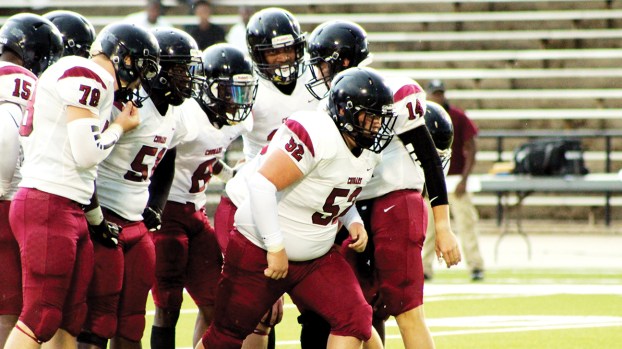 Photo by Cliff Furr The Lawrence County Cougars head south tonight to face the Columbia High Wildcats. Columbia is the top ranked 3A team in the state according to the latest AP poll.

The Wesson Cobras make the short drive up Hwy. 51 Friday night to face the Hazlehurst Indians in an all Copiah County showdown. Similarly, the Lawrence County Cougars will be making a quick trip Friday night when they head south to face the Columbia High Wildcats.

Hazlehurst is under the direction of first year head coach Damien Gary. After losing 19-18 in their opener to Lawrence County, Hazlehurst lost to 4A McComb 34-18 in week two. In their third game they lost a 44-42 overtime battle with their northern neighbors from Crystal Springs. Last week the Indians made a trip to the coast where they faced powerhouse East Central and lost 57-25.

Wesson got their first win of the season last week with a 29-6 triumph over Franklin County. In that game the Cobras aired it out more than they have all season and freshman quarterback Will Loy finished 10-of-15 for 152 yards, one touchdown and one interception.

Junior Antrelle Sims was outstanding in every phase of the game for coach Jeremy Loy and his staff. Sims rushed five times for 100 yards and a score. He caught four passes for 69 yards. Defensively he made four tackles, caused a fumble and picked off a pass.

The key for the Cobra defense will be slowing down the duo of Jahem James and Larry Wilson for HHS. A small, but shifty quarterback, James has thrown for 409 and rushed for 235 through four games. Wilson is a rugged ball carrier who has run 42 times for 611 yards and is averaging 152 yards per game.

The Cobras and Indians begin play Friday night at 7 p.m.

It’s out of the frying pan and into the fire for coach Jesse Anderson and his Cougars (2-2). A week after getting beat 40-6 by 3A Jefferson Davis County, the Cougars make a 40-mile trek Friday night to play a stacked Columbia High team.

The Wildcats (4-0) are led by coach Chip Bilderback and beat 5A North Pike 32-14 last week. CHS is averaging 53 points per game while giving up an average of two scores per Friday night.

Senior Kentrel Bullock is a one man wrecking crew who has rushed 45 times for a staggering 687 yards and 12 TDs. Last week against North Pike he went off for 284 yards on 18 carries while scoring three times.

Lawrence County has their final non-region game next week when they host Wesson. Kickoff in Columbia Friday night is 7 p.m.

There are plotlines a-plenty Friday night for Brookhaven Academy in their 7 p.m. matchup with Cathedral. For one it’s the divisional opener... read more