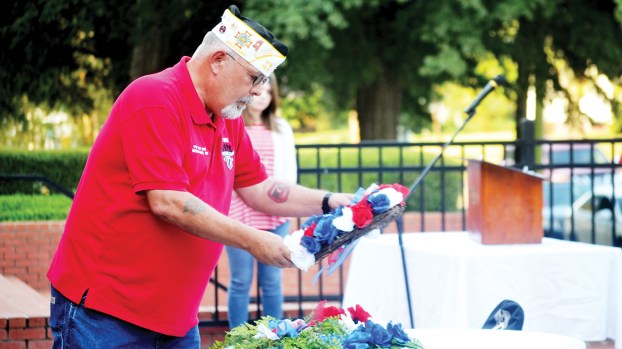 The Brookhaven Veterans of Foreign Wars Post 2618, named for a Special Forces soldier last seen wounded in Vietnam in 1971, remembered their namesake and other prisoners of war and those missing in action Friday with a wreath-laying ceremony at the Lincoln County Veterans Memorial.

This was the second year for members of the Capt. Danny D. Entrican post to host a brief recognition ceremony at the memorial.

Entrican was a first lieutenant with Army Special Forces engaged in highly-classified operations throughout Southeast Asia. He was last seen wounded and presumed captured in Vietnam on May 18, 1971.

The Brookhaven man was declared missing in action in 1973.

On POW/MIA Recognition Day, held the third Friday in September, the Veterans of Foreign Wars of the U.S. remembers the more than 140,000 former American prisoners of war going back to the beginning of World War II, and the more than 82,000 missing and unaccounted-for Americans who have yet to return home from their wars.

At the entrance to the Lincoln County-Brookhaven Government Complex, Post 2618 led a salute to the men and women who served and sacrificed to keep America free, said Commander Greg Marlow.

“We are here to remember the comrades who are being held as prisoners of war or missing in action. We must not forget the sacrifices these comrades are still making and the suffering they are still enduring for us and our way of life,” he said. “They must remain alive in our minds and hearts until we know they have been called to the bosom of our heavenly father. We must continue to give moral support to their families who continue to suffer along with them.”

The two dozen individuals who attended were led in the recitation of the pledge of allegiance to the flag, which is a symbol of the imprisoned and missing veterans.

The red stripes of the flag represent the comrades’ courage and willingness to sacrifice their lives, so a red flower was placed at the memorial to symbolize their courage and gallantry.

For the white stripes, which symbolize the purity of purpose that comrades have in serving under the flag, white flowers were placed at the memorial as a reminder their unselfish devotion to duty.

The blue of the flag symbolizes truth and fidelity and a desire for peace and happiness throughout the world, so blue flowers were placed at the memorial to symbolize the great love the comrades have for the flag and their country.

An evergreen tribute was placed along with the flowers to signify the undying love those in attendance have for imprisoned and missing comrades.

And finally, a laurel wreath was laid among the other tributes as a symbol of victory over death for those who have made the supreme sacrifice. The last token of affection is placed on the table to honor those missing comrades who have died.

Marlow said Entrican is the only POW/MIA veteran from Lincoln County known by the post. If anyone can identify someone else from the area, they’re asked to call Marlow at 601- 730-8281.

The VFW is located at 728 Industrial Park Road NE. The post meets the second Tuesday at 5:30 p.m.