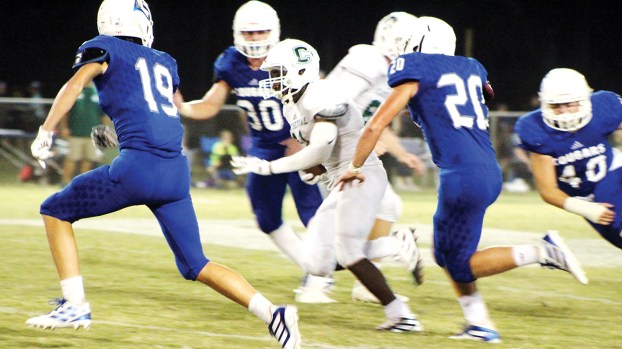 Brookhaven Academy sophomore quarterback Tyler Fortenberry launched himself into the air from three yards out as two Cathedral defenders shot towards his lower legs like heat-seeking missiles. They clipped his knees causing him to somersault into the end zone. The BA sideline — coaches, managers and players — rushed onto the field to celebrate.

There was no penalty for too many people on the field because the clock read zeroes. Fortenberry’s flip into pay dirt gave BA a 34-33 walk-off win in their district opener against the Green Wave.

“I kept pump faking the pass, hoping they’d stay back,” said Fortenberry as he described the wild scramble that led to him leaving his feet. The play call was for slants and when the Cougars didn’t get it, the young, athletic QB improvised.

“After they stayed back I knew I had to do something to get in and I knew they were going to hit me low, so I just jumped over them,” said Fortenberry.

Cathedral had gone up 33-28 with 1:19 left in the game on the previous drive. The score came on a 29-yard run by Bryson Moore. Fortenberry felt confident that was enough time for the Cougars.

“When I saw we had 1:19 left I knew we could pass the ball down and get the winning score,” said Fortenberry.

The belief that they could win was what Cougar coach Ron Rushing was most proud of.

“That shows in the last three years how far we’ve come,” said Rushing. “They expect to win, and they know they can win, they’ve got guys on their team that make plays, even though we’re a young team.”

The Cougars only have four seniors on their roster and one of them made the second biggest play of the game. Senior wideout Harrison Brownlee caught a pass on the final drive that got BA down to the Cathedral 5-yard line with just 11 seconds left. The Cougars spiked the ball to stop the clock and then ran two incomplete passes before the frantic Fortenberry winner.

It was a physical contest and sportsmanship was not at an all-time high for either side as both teams had multiple 15-yard personal foul penalties. The referees met to confirm Fortenberry crossed the goal line with the ball in his possession. When they sprinted off the field after signaling the final score they were showered with boos by an angry Cathedral fanbase.

The Green Wave looked crisp and confident on their opening drive of the game as they met little resistance in going up 7-0 with 8:59 remaining in the first half. The Green Wave needed just four plays to go 71 yards as J.T. Taylor hit Sam Mosby for a 41-yard touchdown pass that was nothing but a dime.

Rushing and his staff implored their squad to wake up and start fighting back as Cathedral had sucked the energy out of the huge homecoming crowd that surrounded R.M. “Red” Stuart Field.

The Cougars went to their senior workhorse to get their first score as running back Nick Ogden caught a screen and picked up two key blocks to spring him for a 50-yard touchdown with 7:38 remaining in the first quarter.

Cathedral answered with a TD run by J.C. Harris to go back up 13-7. A crucial play that changed the complexation of the game happened just before halftime. The Cougar defense looked dead in the water and were forced to punt, but the Green Wave dropped the ball and it was grabbed by BA junior Collin Waldrop.

That play gave the blue and white sideline life as the Cougar had a relatively short field with less than 30 seconds until half. With four second remaining until the break Tyler Fortenberry found Dylan Fortenberry for a 3-yard touchdown on a corner fade to make the game 14-14 at the intermission.

The teams traded shots in the second half and BA went up 28-27 when Tyler Fortenberry found Dylan for a 16-yard score. The BA sideline felt anxious though as Cathedral had 3:16 to go get their next score — something the Green Wave did in exactly two minutes.

The win puts BA at 1-0 in their district and drops Cathedral to 2-1.

“We’ve got to look at the film and figure out what was going wrong defensively for us tonight before we play Parklane next week,” said Rushing. “I’ve got to watch the film to figure out a lot of what happened tonight. It happened so quick, I saw him take off and I was as shocked as everybody else when he got in,” said a smiling Rushing.

Cobras get history-making win over Hazlehurst

The Wesson Cobras (2-3) showed no quit Friday night as they overcame a two-score deficit to beat their neighbors to... read more