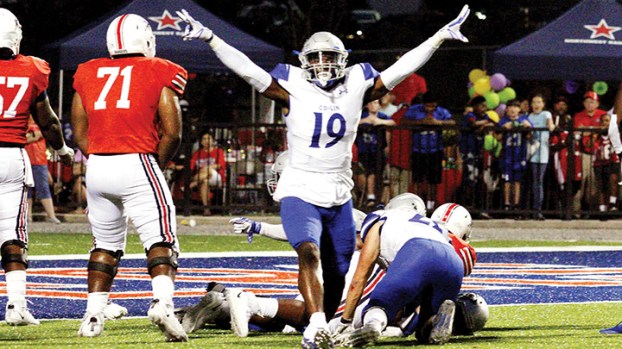 Despite outscoring the Rangers 15-3 in the second half, the Wolves were unable to escape Senatobia with a cross-divisional victory as No. 3 Northwest hung on in the final minutes to defeat No. 8 Co-Lin,  19-15. With the win, Northwest improves to 4-0, 1-0, while the Wolves drop to 3-1, 1-0. Co-Lin returns to action Sept. 26, as the Wolves are back in Stone Stadium in Wesson for the first time in two weeks as they play host to Mississippi Gulf Coast who is entering the game off a big, 20-14, victory over Jones College.

The currently ranked No. 4 Bulldogs, who are 4-0, 1-0, will be the second top-5 ranked opponent for Co-Lin in just two weeks. Thursday night will serve as Co-Lin’s Blackout Game and fans are asked to wear black. The contest will also serve as Co-Lin’s Veterans Salute game. There will be several pre-game activities honoring all of those who have and are serving in the military. Military members will also be recognized throughout the game. Kickoff is set for 6:30 p.m.

Everything seemed to fall in favor of the Rangers to start the game as Northwest quickly capitalized on a Co-Lin three-and-out to start the contest. After a 35-yard punt return, the Rangers started their first possession in Co-Lin territory. Just four plays later Urriah Shephard punched it in from five yards out to put Northwest on top 7-0 with 12:45 on the clock in the first quarter.

Some trouble on the kickoff led to the Wolves starting the ensuing drive from their own seven-yard line. Two plays later, Co-Lin’s Danny Clark was sacked in the end zone for a safety which put the Rangers up 9-0 just three minutes into the game.

Things finally began to slow down as the Rangers went on an 11-play drive that reached Co-Lin’s four-yard line. The drive was halted as the Wolves made an epic four-down stand with their backs against the wall. Key stops in the red zone were made by Jordan Davis, Lawilliam Holmes, Tavarian McCullum, and Khehlan Kennedy. The stop gave Co-Lin momentum, but a long field on the following drive. The Wolves began marching, but the drive was ultimately cut short by a Northwest interception. The Rangers took advantage of the turnover with big runs from Shephard and a 21-yard scoring run from Jaquerrious Williams. The score put Northwest up 16-0 early in the second quarter.

The remainder of the second quarter saw several punts and a blocked Co-Lin field goal attempt. At the half, the Rangers led 16-0.

Northwest got the ball to start the second half and went on a 13-play, 57-yard drive that ended in a 33-yard field goal from Cole Catalano and took over six minutes off the clock. The score stretched the Ranger lead to 19-0.

Co-Lin roared back to life midway through the third as JJ Jernighan and Clark began to lead the Wolves down the field. The drive stalled at Northwest’s 37-yard line, but on fourth-and-13 Clark escaped the pocked and hit a wide-open Antoine Robinson. Robinson took it to the house to put Co-Lin on the board. Bryce Lofton chipped in the extra point making it 19-7.

Early in the fourth, after several back-and-forth punts, Northwest took over at their own 23-yard line. Just three plays into the drive, Jack Walker, Northwest’s quarterback, made a backward pass that fell behind the line of scrimmage for a fumble. Co-Lin’s Tyrus Wheat seized the opportunity and scooped and scored the fumble from 20-yards out. The score, Wheat’s second defensive touchdown of the year, cut into the Rangers lead. Clark connected with Malik Heath for the two-point conversion to make it 19-15 with 12:25 to play.

Late in the fourth, the Wolves had possession and drove to Northwest’s 36-yard line, but the drive was stopped as Clark’s pass was batted down at the line of scrimmage on fourth-and-seven. Northwest took over with 3:42 to play, but Co-Lin’s defense, led by Lamarcus Faulkner, stepped up and forced a three-and-out. The Wolves had one chance left with 2:41 on the clock and no timeouts. Clark hit Robinson for a 26-yard gain, but once again the drive failed on fourth down which resulted in a 19-15 Northwest win.

Clark finished the night 19-of-43 for 263 yards with one score and one pick, while Jernighan led the rushing attack with 46 yards on 10 carries. Robinson led Co-Lin’s receivers for the second straight game with 135 yards on six catches and a score. Kundarrius Taylor was next with 50 yards, while Heath finished with 49.

Defensively, Jordan Davis and Khehlan Kennedy led the way with 10 tackles each. Davis posted two tackles for loss, while Kennedy wrapped up one sack. R’Tavius McGee also had a strong outing with eight tackles.

Here’s a look at who and where the four Lincoln County schools will be playing Friday night. Bogue Chitto The... read more