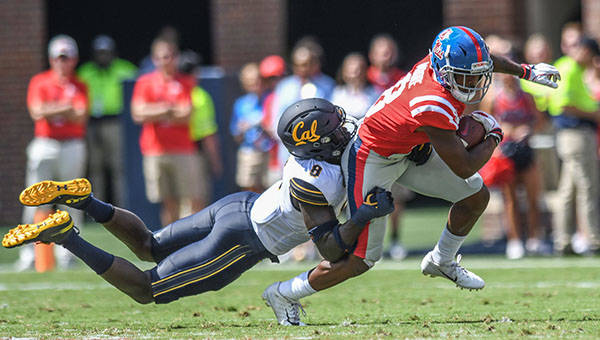 OXFORD (AP) — California linebacker Evan Weaver finished with 22 tackles Saturday against Ole Miss. The last one was the most important.

Weaver tackled Ole Miss quarterback John Rhys Plumlee for no gain at the 1-yard line as time expired to preserve No. 23 Cal’s 28-20 victory over the Rebels. Weaver crashed hard from the right flank, wrapped up Plumlee and stopped his progress as help arrived to finish the play.

“Just stop the guy with the ball. Keep him from crossing the white stripe,” Weaver said. “We got some push in the middle and put it in them.”

Before Weaver’s decisive play, Plumlee had completed a third-down pass to Elijah Moore at the 1-yard line with less than 15 seconds remaining. Ole Miss head coach Matt Luke believed Moore had crossed the goal line on the reception and was pleading with the game officials to stop the clock for a look at the replay.

“I thought at the very least, it should have been buzzed and reviewed,” Luke said. “We didn’t have a timeout. We could not spike it. Our only option was to get a quarterback sneak and get the ball off.”

Instead, the Pac-12 officials quickly marked the ball at the 1-yard line and the Rebels beat the clock to attempt a scoring quarterback sneak by Plumlee. The unsuccessful sneak was reviewed and confirmed by officials after time expired.

The Rebels “are expecting a full explanation from the Pac-12 regarding the call and subsequent non-review of the 3rd down play,” Carter tweeted. “We feel strongly that the play should have been reviewed by the Pac-12 officials in the review booth. Even if the play didn’t result in a touchdown, the spot of the ball on 4th down was questionable.”

The wild finish almost overshadowed a brilliant performance from California quarterback Chase Garbers, who threw for four touchdowns and finished 23-of-35 for 357 yards. Touchdown passes of 9 and 60 yards to Jordan Duncan and Jake Tonges on the opening two possessions of the second half preserved a lead Cal never surrendered.

“Chase was awesome. It’s not even close. That’s the best game he has played,” Wilcox said. “The receivers did a really nice job. I was impressed how Chase looked so comfortable. He was really confident out there.”

Cal finished with 433 yards of total offense, including first-half touchdown passes by Garbers of 6 and 13 yards by Trevon Clark and Christopher Brown Jr. The Golden Bears were efficient offensively, managing 6-of-12 in third-down situations and 3-of-3 in the red zone, capped by touchdowns.

The Rebels (2-2) got strong performances from quarterbacks Matt Corral and Plumlee, who led the final two possessions. Corral had a 1-yard scoring run and was 22 of 41 passing for 266 yards before leaving with a rib injury. The Rebels had 525 yards of total offense but failed on two scoring opportunities with missed field goals.

Plumlee was 7-of-7 for 82 yards in the final six minutes. Jerrion Early scored on a 15-yard run with 4:29 left to cap Plumlee’s first series. The Rebels went 89 yards in 10 plays in the final 2:45, finished by the defensive play from Weaver.

“We had a great opportunity today, but we just didn’t make enough plays to win the game,” Luke said. “Matt did well but we’ve got to look at the rib injury. John Rhys made the most of his opportunity.”

TUSCALOOSA, Ala. (AP) — The glaring sun was the only thing that slowed down Alabama receiver Henry Ruggs III early,... read more