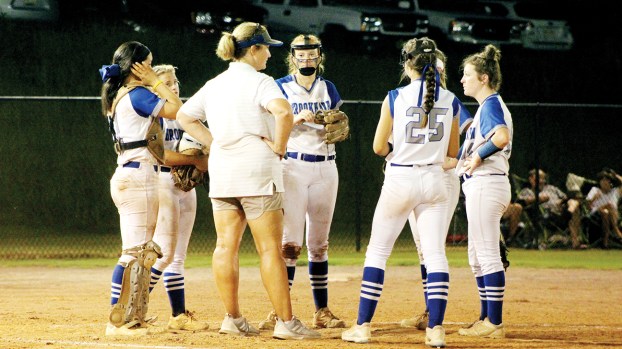 The Brookhaven Academy Lady Cougars battled back from the losers’ bracket Monday at the MAIS 4A South State Tournament in Magee to face Hillcrest in the tournament finals. The Lady Cougars from south Jackson scored five runs in the bottom of the seventh inning to take a 6-4 walk-off win over the BA Lady Cougars.

Brookhaven Academy (29-6-1) would have had to beat Hillcrest (21-8-1) twice as they were unbeaten in the tournament that started Saturday, but that’s where things appeared to be going with BA leading 4-1 and Hillcrest down to their final three outs.

The meeting Saturday was the first between Hillcrest and BA this season and the Lincoln Lady Cougars went down 14-4. Brookhaven Academy bounced back on Saturday to eliminate Cathedral with a 10-4 win.

On Monday, BA first faced its district rivals from Silliman Institute in an elimination game. Both of those two teams — along with Hillcrest and Hartfield — had already qualified for the state tournament next week at Magee.

The last time BA faced Silliman, the Lady Wildcats won 9-7 on their home field in Clinton, Louisiana. Monday morning in Magee, the Lady Cougars got a measure of revenge when they beat Silliman 3-0.

Emily Claire Felder pitched the win for BA over Silliman as she scattered four hits and struck out seven while only walking one. Madison Moak had a double for coach Becky Flowers while Abby Grace Richardson and Kaylie Burgess each drove in a run. Bailee Goodson also got aboard with a hit for BA.

Hartfield had been sent to the loser’s bracket after losing by 10 runs to Hillcrest in a matchup of the two remaining unbeaten teams. BA then eliminated Hartfield with an 11-1 trouncing that saw the blue and white stack up 17 hits.

Felder was again the winning pitcher as she surrendered five hits and one run while striking out five. Madi Smith homered and drove in a pair of runs. Moak, Godson and Felder all hit doubles while Richardson smacked a triple. Senior Hallie Creel drove in three runs. That big win set up the second Hillcrest versus Brookhaven matchup.