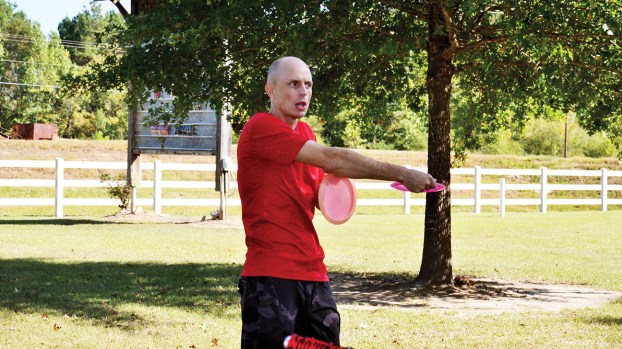 A new sport is gliding in to Monticello

The sport works a lot like golf. But instead of hitting balls across a field, the player is throwing discs. Instead of a hole in the ground, a metal basket equipped with a net is used.

Monticello Mayor Martha Watts said she was unfamiliar with the game a year ago, but when she looked it up on the internet, Atwood Park seemed to be a perfect fit for the sport.

“We have a one-mile paved loop that looked perfect,” Watts said. “I contacted Tony Bass. He came and looked at it, and he was extremely excited.”

Bass — some call him “Largemouth” as a play on his last name — is a professional disc golf player. If you talk to him, he will gladly boast that he wins prizes at 95 percent of the tournaments he plays in. He also has a passion for building new courses and growing the sport.

“That’s my passion for life right now, outside of my three kids and my wife,” Bass said. “I love designing courses. Those are my people. If I install that course, every person who learns the game due to that course is kind of under my umbrella.”

According to Bass, disc golf is a fast-growing sport that has been slow to gain traction in the southeastern United States. However, Bass said that is quickly changing.

On Saturday, Bass held a free clinic at Atwood Park where he demonstrated different techniques for throwing the discs to a handful of disc golf enthusiasts and one badly out-of-shape reporter.

“At the beginning, nobody throws it far,” Bass said. “Everybody struggles with distance and control.”

This includes Bass himself. Bass said he’s always been an athlete, but when he was introduced to the sport, it didn’t come easy at first.

“I had the build for a disc golfer, all of 172 pounds with arms like a monkey,” Bass said. “I was terrible. Terrible. I am very much a competitive person. That motivated me to come out and play more and more.”

“I did it in my name to get the ball rolling,” Bass said. “I knew the park was perfect for the course.”

Bass said businesses can sponsor the holes for $500, and a sign will be placed at the sponsored hole for the life of the course. Currently, three have been sponsored — one by the City of Monticello; one by Corey Ward, a disc golfer from Brookhaven; and another from Julian Stubbs, a disc golfer from Jackson.

Despite only being a recent addition to the park — Watts said the holes were added in August — a tournament has already been held and Watts said she has had a number of calls from people both in and outside the community about the disc golf course.

“We had people from Mobile and New Orleans. We had some from Philadelphia, Mississippi,” she said. “They came from far away to play this course. It’ll be good for the town, bringing people in.”

The unemployment rate for Lincoln County in the month of August rose from July due to a decrease in available... read more