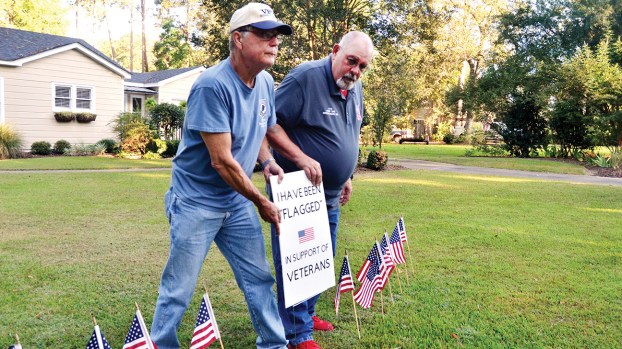 Photo by Aaron Paden Veterans of Foreign Wars Cpt. Danny D. Entrican Post 2618 Post Quartermaster Tommy Allison, at left, and Post Commander Greg Marlow place a “I have been flagged” sign in a yard recently, along with several small American flags, to show a resident’s support of veterans. The “flagging” is part of an effort to raise funds for Wreaths Across America.

VFW wants you to get flagged

If you keep an eye out this weekend you might just find that you’ve been flagged.

Greg Marlow is the post commander of Veterans of Foreign Wars Cpt. Danny D. Entrican Post 2618 in Brookhaven. Like all VFW members, he’s a combat veteran. He served in the United States Army for 22 years and fought in Desert Storm.

VFW raises money for Wreaths Across America every year. But this year, Marlow said he wanted to do something a little different. In their efforts to raise money for the wreaths, the VFW in Brookhaven will place a row of American flags on a resident’s yard — their own or someone else’s — for $25. For a $5 donation, the flagged party can discover the name of the sponsor.

So far, the VFW has placed flags at eight residences in Brookhaven over two Saturdays. Marlow said he hopes as more people see the flags it will encourage them to call in and donate.

“We all meet up at 11 on a given day,” Marlow said. “The wreaths that are purchased, we start laying them at grave one and keep going until we run out of wreaths.”

The names of each veteran will also be spoken aloud at the ceremony — a ritual that Marlow believes is of particular importance.

“Everybody dies two deaths,” Marlow said. “The day of their physical death and the day the last time their name is spoken. If we remember their names and say them, they’re not dying their second death.”

The fundraiser will continue until Veterans Day on Nov. 11. Anyone interested flagging their neighbor or making other inquiries can call Marlow at 601-730-8281.

Edited to correct date of Wreaths Across America to Dec. 14.

A new sport is gliding in to Monticello