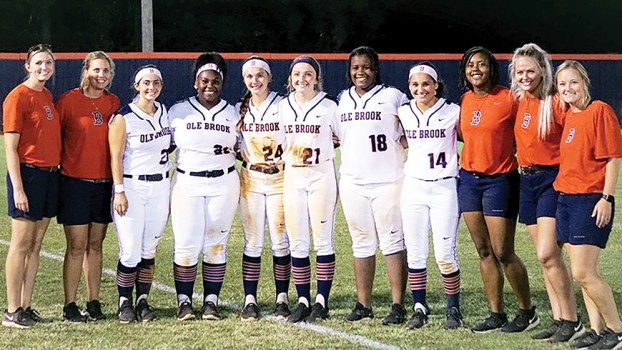 It was senior night for Ole Brook as they honored a six-member senior class.

Wesson then tied the game at 4-4 when Catherine Wilson scored in the top of the third off an RBI single by Katie McSweyn.

Brookhaven regained the lead in the bottom of the fourth on a sacrifice fly by Kaysha Register and going into the fourth inning the Lady Panthers led 5-4.

The Lady Cobras answered back as Bre Westbrook led the inning off with a double off the left field wall and a few batters later Anna Claire Crow had an RBI single to score Westbrook and tie the game at 5-5.

Ole Brook bounced back and took the lead as Nations led the next half inning off with a single and would eventually be knocked in by a Lulu Cook fielder’s choice that put Brookhaven up 6-5.

There was no quit in the visitors from Wesson, though, as a big fifth inning propelled them towards the win. Working as a pinch hitter, McElveen stepped to the plate and blasted a three-run bomb over the left-field fence that put her team up for good.

“Proud of my girls for fighting all game tonight. There were a few lead changes and it was an intense game, but the girls kept fighting hard defensively and putting hits together when we needed them. This was a good win for us,” said Wesson head coach Michelle Nunnery.

Brookhaven High travels to South Pike tonight and plays at Franklin County on Tuesday before being on the road in the first round of the playoff Oct. 5.

Wesson travels to Franklin County tonight. They’ll host Bogue Chitto for senior night on Oct. 1 and then play the next day at home against Crystal Springs before starting the playoffs next week.

For the second week in a row, the Wolves of Copiah-Lincoln Community College will face an NJCAA top-five opponent as... read more