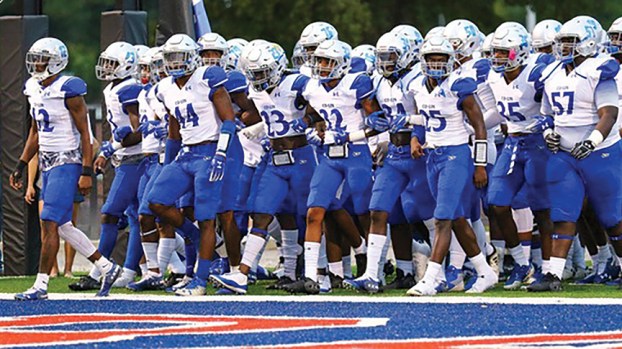 Photo by Co-Lin Sports Information The Copiah-Lincoln Community College Wolves (3-1, 1-0) take on the Mississippi Gulf Coast Community College Bulldogs (4-0, 1-0) tonight at 6:30 p.m. at Wesson. Fans are asked to wear black to the game.

For the second week in a row, the Wolves of Copiah-Lincoln Community College will face an NJCAA top-five opponent as No. 11 Co-Lin (3-1, 1-0) takes on the No. 4 Mississippi Gulf Coast Bulldogs (4-0, 1-0) Thursday in H.L. Stone Stadium on the college’s Wesson campus. Kickoff is slated for 6:30 p.m. and fans are asked to wear black to the game. There will also be numerous veteran and military member recognitions prior to and during the game. Any member of the community that has any involvement with the military is asked to attend.

Co-Lin’s offense came to life in the second half last week against Northwest as the team gained nearly 200 yards in the final two quarters while holding the Rangers to less than 70. The late-game push fell just short as the Wolves lost, 19-15, but it showed the talent and ferociousness of the Wolves. Co-Lin utilized big passing plays last week and the Wolves currently rank fourth in the nation in passing yards per completion as the team averages 16.6 yards per reception. The Wolves also rank in the top 10 in fourth-down conversions with success on five-out-of-10 attempts.

Gulf Coast enters the game off a nail-biting 20-14 win over then-ranked No. 13 Jones College. The Bulldogs had the Wildcats shutout through three quarters, but Jones sparked a comeback in the fourth with a blocked punt that led to a score, and another touchdown on the heels of a big punt return. The Wildcats threatened late in the game, but Gulf Coast made a goal-line stand in the final minute to hang on to the win.

In the passing game, Co-Lin and Gulf Coast matchup almost perfectly as both squads have passed for exactly 997 yards. However, the Bulldogs have outrushed the Wolves 844 yards to 271. This difference ranks Gulf Coast’s offense 13th in the nation and drops Co-Lin’s to 32nd. On the defensive side, the two teams rank second and third in the nation in pass defense. The Bulldogs have surrendered just 96.5 yards per game this season, while Co-Lin has given up just 101.3 yards through the air per game. The Bulldogs are also in the top-10 in rushing defense as the team gives up an average of 69.5 yards, while the Wolves are 20th after surrendering 104.8 yards per game.