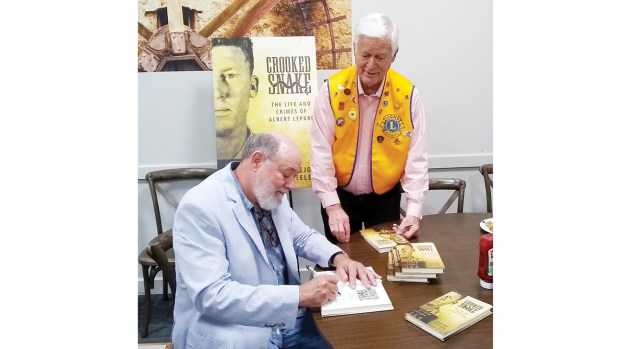 Photo by Aaron Paden Lovejoy Boteler, author of “Crooked Snake: The Life and Times of Albert Lepard,” signs his book for Lions Club member Wendell Davis after previewing his book to the club at Poppas Buffet and Grill Tuesday.

The Lions Club is perhaps the oldest service organization in Brookhaven.

Joining the Lions Club is by invitation only. But Lions Club President Jim Hickman said the most important quality in a member is a willingness to work toward their community projects.

“The Lions Club is strictly a service club,” Hickman said. “If they will agree to help us raise funds, we will be happy to have that fellowship every Tuesday and have a good time.”

Part of their dues, which are $45 a month, includes their weekly meeting at Poppa’s Buffet & Grill, which they hold at noon every Tuesday. Every week, a guest is invited to speak to the group. Guests have included Gov. Phil Bryant, business leaders and others.

“We have a diversified group of speakers because the Lions are diversified,” Hickman said.

On Tuesday, their guest speaker was Lovejoy Boteler, author of “Crooked Snake: The Life and Crimes of Albert Lepard.”

The book details the life of a man serving a life sentence in the 1960s at Parchman Penitentiary, Mississippi’s maximum security prison for men. There, he escaped six times. Boteler was particularly close to this story, because in 1968, at age 18, Boteler was kidnapped at gunpoint by Lepard following one of his escapes.

“It would be an interesting story,” Boteler said of that day. “But it would be kind of a short story. But I knew back in 1968, my mother kept a scrapbook.”

Boteler said he wasn’t too interested in reading the scrapbook as an 18-year-old boy, but reading it later in life led him on a three-year quest to find out more.

“I put it all into the book from the standpoint from people who were just like me,” he said. “They were tied up. They were robbed. They were victims in some kind of way. Nobody ever asked them, but it was the biggest story of their life.”

Boteler said he compiled as many as 600 pages of transcripts of taped interviews from victims, retired police officers and other convicts that had escaped with Lepard.

And his hard work paid off, because the book has sold very well in Mississippi. Published on March 21, it is already nearing a third printing. During the meeting, Boteler read an excerpt from chapter 15, detailing his own kidnapping. Books were also available to purchase, and Boteler was available to sign copies for club members.

Boteler isn’t the only Mississippi native invited to share an interesting personal story. For the upcoming Tuesday meeting, Rich Huffstutler — who works at Stan King Chevorlet in Brookhaven — has been invited to attend the event and talk about walking across the United States with only 50 cents in his pocket and a lot of faith.

“The other clubs in Brookhaven have real good meetings,” Hickman said. “We like to think we’re the oldest and the best.”

When they aren’t meeting at Poppa’s, the Lions Club is working in the community. Hickman said 100 percent of the money they raise in fundraisers goes to programs and non-profits throughout Brookhaven and Lincoln County.

“We support most of the organizations that are trying to help people,” Hickman said. “Doll’s House is one. We have many of them.”

They also have programs of their own. Hickman said the Lions Club sponsors vision screening for over 3,000 students in Brookhaven and Lincoln County, though he stressed the test isn’t a replacement for an exam with an eye doctor. Hickman said he’s also a chairman on their sight applications committee.

“We can get an idea if they’re having stress with their eyesight,” Hickman said. “If it seems like they have a problem, we notify the school nurse, who then notifies the parents. Then we suggest they have an exam by a qualified optometrist.”

Hickman said the Lions Club is also able to provide glasses for those who can’t afford them or don’t have insurance.

“I’ve been a member of Brookhaven Lions Club for 24 years,” Hickman said. “I’m still amazed at how much we can do when all of us work together to help people in Brookhaven and Lincoln County.”

Heart attack may have led to fire

Authorities believe a grass fire reported Wednesday at a farm on Arm Road in Lawrence County may have been started... read more