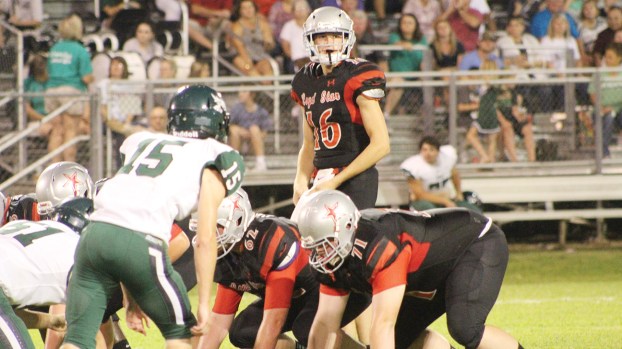 Photo by Cliff Furr Loyd Star hosts Mize tonight on W.E. “Sambo”Smith Field. The teams met last season at Loyd Star in the playoffs, a game Mize won 36-34. Tonight is the last non-region game for all of the Region 7-2A teams in the area as division play begins next week.

It’s homecoming Friday night on Hwy. 583 as the Enterprise Yellow Jackets host the visiting Clarkdale Bulldogs. Across the county Loyd Star will be hosting a different group of Bulldogs, these from Mize. West Lincoln is back in Madison County for a second straight week, playing at St. Andrew’s Friday night and Bogue Chitto heads south to play the St. Patrick Fighting Irish just outside of Biloxi.

Coach Trey Woodard and his group of Yellow Jackets (1-4) finish up the non-region portion of their schedule with a matchup against Clarkdale (2-3).

The 3A Bulldogs will have a huge numbers advantage as the already small Enterprise roster has been hard-hit by injuries. Enterprise gets their region schedule started next week at Loyd Star. Last week Enterprise lost 32-0 to St. Patrick at home.

The Enterprise homecoming queen will be crowned, and the court will be presented in a 6 p.m. ceremony in the gym. The game kicks off at 7 p.m. on Harry Cole Field.

The Hornets (1-4) are back on W.E. “Sambo” Smith Field Friday night as they host a formidable opponent in Mize (5-0).

Loyd Star went up 7-0 on McAdams in a road game before the Bulldogs came roaring back to take a 36-7 win last week.

Junior running back Eric Birch got his first action of the season carrying the ball after dealing with an injury and led the Hornet offense with 78 yards on 22 carries. Senior quarterback Stephen Mills rushed for a lone score and went 2-of-7 passing for 11 yards.

Last week West Lincoln (2-3) found themselves down 14-0 at halftime before eventually losing 28-7 at St. Joseph in Madison.

Senior quarterback Travis Hall finished 10-of-17 passing for 85 yards. Senior running back Michael Brothern carried the ball 14 times for 189 yards and one score — 70 yards came on one run. The Bear offense was knocked off track by three fumbles and two interceptions.

St. Andrew’s (1-4) lone win of the season was a 27-20 win over Newton in week two. The Saints were also beaten 28-7 by St. Joseph in their annual Catholic grudge match called The Holy War.

Kickoff in Ridgeland is scheduled for 7 p.m.

The final non-region game of the season for Bogue Chitto will take the Bobcats (2-3) to the campus of St. Patrick in Harrison County.

St. Patrick (4-1) is off to the best start in school history after beating Enterprise 32-0 last week. Coach Gareth Sartin and his Bobcats were outscored last week in Rankin County as they lost 47-28 to the Puckett Wolves.

BC quarterback Shaw King went 15-of-28 for 243 yards and a pair of scores against Puckett. Senior wide receiver Zach Upkins had a monster game as he made seven catches for 142 yards and a touchdown. Junior Tristan Buffington also caught a score for the Cats.

Junior Reid Smith had a big game as well, 55 yards rushing and 83 yards receiving. Colten Bales led the BC defense with nine tackles with two of them for a loss. Smith also made eight tackles defensively.

The Bobcats will get their region schedule started next week by hosting Amite County. Kickoff Friday night at St. Patrick is set for 7 p.m.

The Wesson Cobras (2-3) come into their matchup tonight at Lawrence County (2-3) with some momentum after winning their last... read more