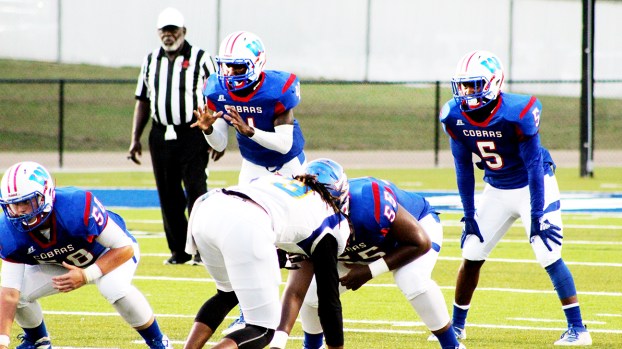 Photo by Cliff Furr Wesson travels to Monticello tonight to face Lawrence County. The game will serve as homecoming for LC as the 2A Cobras step up two classes to play the 4A Cougars. Kickoff is set for 7 p.m.

The Wesson Cobras (2-3) come into their matchup tonight at Lawrence County (2-3) with some momentum after winning their last two games. Coach Jesse Anderson and his LC Cougars have played three straight road games and are glad to be back in Monticello as the game will serve as homecoming for Lawrence County.

Last week the Cougars went toe-to-toe with 3A heavyweight Columbia before suffering a 20-13 loss. LC jumped up 13-0 before CHS took a 14-13 lead at halftime.

Junior quarterback Haden Mullins had his best passing night of the season for LC as he went 4-of-7 for 81 yards through the air with a touchdown to Brian Bogan.

Senior running back Kylan Cooper carried the ball 18 times for 55 yards and one score to lead the Lawrence County rushing attack. Kendrick Madison and Stefan Pierce made 10 and nine tackles each respectively.

Javarious Bryant had an interception while Zedarian Warnsley and Jerid Dunaway each recovered a fumble for the Cougars. Pierce also caused a fumble as the Lawrence County defense held a Columbia offense in check that had been averaging nearly 60 points per game.

In their season opener Lawrence County beat Hazlehurst 19-18 in a grind of a game. Last week Hazlehurst was the opponent for Wesson and coach Jeremy Loy and his team made school history when they beat the Indians 28-21 for the first time ever.

Freshman quarterback Will Loy had his biggest game of the season in the win over HHS as he went 17-of-32 passing for 228 yards and three scores. Junior Orlando Smith rushed 21 times for 80 yards and one touchdown.

Junior Antrelle Sims was ridiculously good catching the ball against Hazlehurst as he pulled in 11 passes for 178 yards and two scores. His longest TD went for 71 yards. Terrance Haley had one catch for nine yards and a TD.

The key for the young Cobra defense will be gang tackling as they’ll face a bigger and more experienced Lawrence County offensive unit. Protecting the quarterback and ball will also be important for Wesson as the LC defense has speed at every position, led by Pierce and Bryant at defensive end.

Kickoff is at 7 p.m. in Monticello and will be preceded by the presentation of the homecoming court and crowning of the queen.

Panthers on the road at West Jones

The Brookhaven High Panthers (1-4) face an old familiar foe tonight when they open Region 5-5A play with a trip... read more