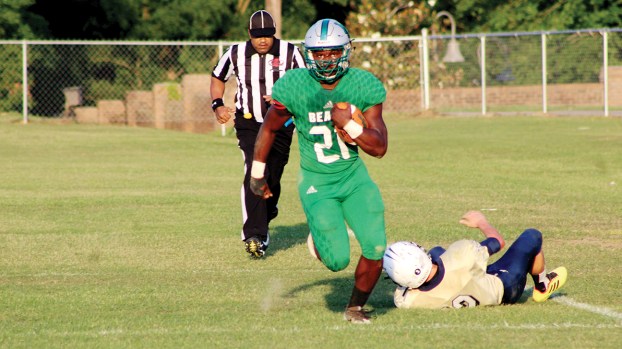 Senior Logan Smith picked off a St. Andrew’s (1-5) pass deep in West Lincoln (3-3) territory with just eight seconds remaining in the game to preserve a 26-20 win for the visiting Bears Friday night in Madison County.

It was the second interception of the half for Smith as WL had to hold off a frantic St. Andrew’s comeback attempt that was preceded by a turnover on downs. The Bears had gone for it on fourth down with around three minutes remaining and leading by six, but the Saints stopped them and then began driving for what would have been the tying or go-ahead score.

“Extremely proud of the effort our guys showed in getting the win,” said WL coach Brad Bland. “We bent but didn’t break and Logan made a huge play to end it for us.”

The game was tied at 6-6 in the first quarter as an Enrico Price rushing touchdown put WL on the board early.

Things were also tied 13-13 at halftime as the green and white got the tying score with just 11 seconds remaining in the half. On that TD drive junior wideout Chris Freeman made three catches including one that got down to the SA 2-yard line.

Senior running back Michael Brothern punched it in to knot the score.

It looked like things would be easy late as the size and strength of West Lincoln created some distance. St. Andrew’s only dresses 20 players, but Bland says they have quality despite their lack of depth.

“You’ve got to tip your hat and give credit to their guys,” said Bland. “Even with low numbers they don’t give in or give up and make you earn everything.”

A pair of long runs in the second half, a 21-yarder by quarterback Travis Hall and a 21-yarder by Brothern, both went for scores. Leading 26-13 it looked like West Lincoln had the game in hand before St. Andrew’s began their comeback late.

Now the Bears turn their attention to their Region 7-2A opener next week against Wesson. The two teams return the most experience of anyone in the region and West Lincoln will host the game on Perry Miller Field.

A close game in the first half went south for Bogue Chitto (2-4) in Harrison County Friday night as the... read more