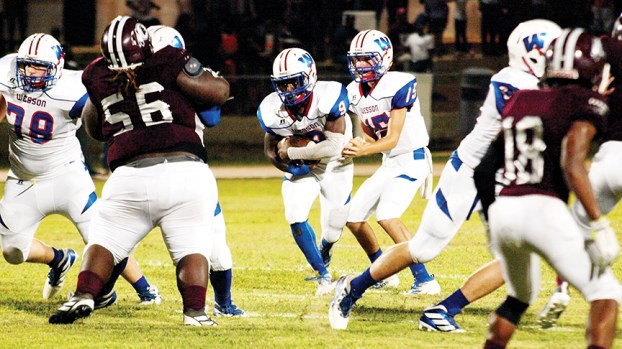 Photo by Tracy Fischer Wesson freshman quarterback Will Loy and running back Orlando Smith saw their Cobras only trailing Lawrence County 28-18 late in the second quarter Friday before a long Cougar touchdown made the score 35-18 at the break. The Cougars pushed that lead out in the second half as Lawrence County won 57-30 on homecoming in Monticello. The Cobras open Region 7-2A play next week at West Lincoln while LC travels to Raymond.

The 4A Lawrence County Cougars (3-3) used their double wing rushing attack to wear down the visiting 2A Wesson Cobras (2-4) Saturday night in Monticello for a 57-30 win.

The snakes from Copiah County were not a homecoming sacrificial lamb however as head coach Jeremy Loy had his team slinging the ball around early as they took the fight to the Cougars.

Lawrence County senior running back Kylan Cooper put his team up 7-0 in the first quarter with a 5-yard scoring run. All told Cooper would score three times in the opening 12 minutes of action.

Wesson responded though as their baby-faced freshman quarterback Will Loy found Jakerio Miller for a 45-yard scoring pass that tied the game up at 7-7.

The Cobras also got a 20-yard field goal from Preston Lee as LC led 21-10 on the strength of Cooper’s running after the first quarter.

Junior running back Orlando Smith pulled WAC within 21-16 early in the second quarter with a 5-yard scoring run. Perez Tyler of Lawrence County scored his first rushing touchdown of the night to answer, but a bad snap on a punt went out of the end zone for the Cougars later in the quarter and Wesson had pulled within 28-18.

That would be about as good as things got for the visitors though. An 81-yard run by Cooper with just 22 seconds left until half knocked the wind out of the Wesson upset bid.

Antrelle Sims came in at quarterback for Wesson in the second half. Sims ran for one score and threw another to Damien Smith. Sims had several big catches as a wide out when Loy was in at QB.

The Cougars will be favorites Friday night when they travel to Hinds County to open region play against the Raymond Rangers (3-3). Wesson is on the road for their Region 7-2A opener next week at West Lincoln.